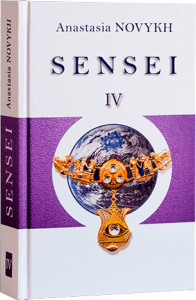 Why should we let our thoughts deteriorate to the state of impassability? It is better to take the tools and turn this jungle into a noble garden. Regain some order in your thoughts. Because you are the one who decides whether to spend the rest of your days roaming about in the impenetrable jungle like a monkey in search of bananas or to spend it like sages walking around a well groomed garden.

Even though this book is a continuation of the previous series of the books, it can be considered to be an independent work, taking into account the amount and quality of information it contains. It is precisely in this book that Sensei, in his easy manner, shares with his friends the deep knowledge of the world history covering a period from the times of Ancient Egypt to present day. It includes a fascinating story about Imhotep, who came from an ordinary family and, due to his knowledge and labor, was able not only to achieve a high public post and become a second-in-command to the Pharaoh, but also to reform the system of state management in such a way that the most talented and highly moral people, regardless of their social origin, could hold responsible positions. And as a result, Egypt had reached a level of such social development that it was not able to achieve in all of its subsequent history.

To be a human, to live up to the highest spiritual purpose, to do what one can to assist people -these are the real values that can be gained in this world and taken into Eternity. Everything in this world has a Beginning and an End. But only for those who attain the Supreme by their thoughts and deeds, the End becomes the Beginning.

Apart from that, the book contains detailed information about Archons (mentioned in the “Sensei of Shambala” Book 3) – a small group of people who aspire, due to their ideology and considerable capital, to supreme power all over the world. A story is told about their clan formation, the methods of their destructive work in various countries at different times, about secret organizations established by them and those crucial moments in different nations’ history which were provoked by their helpers. It contains samples of the Archons activity on a larger scale. We can find a story about creation of the USA, by whom and for what purposes ” the most democratic country” was financed and established. How the First and the Second World Wars were prepared and financed, and who in reality had gained from these global wars. You will find less well-known information about international politics connected with Suez Canal, about large-scale machinations of Archons in foreign policy and little-known facts about creation of The Statue of Liberty. It also contains information about when the Archons plan to launch a Third World War.

Temptation of this world attracts, only God guards against it. One who does not know the essence can not withstand the temptation. The one who knows the Truth will see the essence even if it is hidden. The Light of the Truth will shine through dense darkness for the one who seeks the Truth even if all of the darkness will oppose the Light. Because the time has come to open what has been hidden for centuries. Because it is time to tell the Truth.

In addition to that, the book contains information about life and public work of the famous scientist Omar Hayam, about mercenary use of his work by Isaak Newton. It depicts life stories of some famous people who affected the course of history. It has interesting cognitive information for physicists and astronomers. The possibilities of nanotechnologies are also mentioned. As well as real outer space achievements of humanity. It contains a lot of interesting facts of mythology of various nations. In addition, it has insightful information about history of Christianity origin and activity of Jesus and Maria Magdalena as well as Peter and Paul . Which events and myths of the past were used by John in his Revelations. It contains facts about The Order of Knights Templar. It has the most impressive information about mystery and unknown history of the Grail.