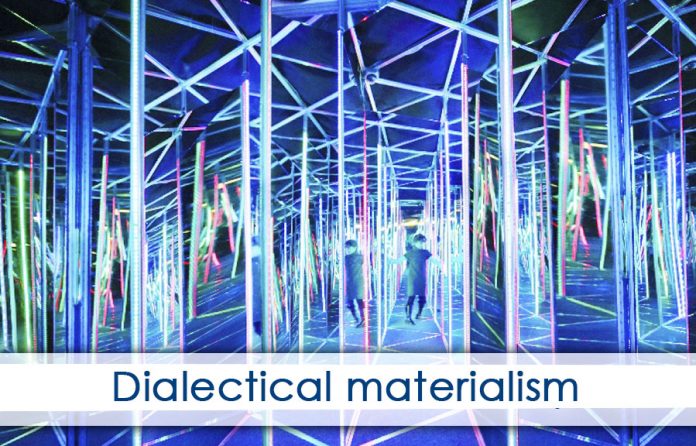 Studying the topic related to God’s mother, it always leads to many incredible discoveries. I never stop wondering how obviously the knowledge of her...
Read more
Science articles

An international group of theoretical physicists and astrophysicists provide evidence that the universe is a huge complicated hologram. The results have been published in...
Read more

Knowledge is a sword that destroys any illusion.

Once I happened to see a magnificent scene in a satirical humorous movie. The character was asked to abandon his discovery, as well as to deny his own convictions.  And one of the reasons why it was easy to do that was the following argument: “But Galileo did refuse!.” To which the character replied with a brilliant phrase: “That’s why I’ve always liked Giordano Bruno”.

Today we all live in a technologically sophisticated  age. In any case, we wishfully think so. After all, people don’t have answers to the most trivial questions, which science that’s been developed for so many years, should’ve given answers to: how and why was this world created? Who am I? Why am I here? What is life? What is death? But these questions worry every person. Maybe this is due to the fact that modern science doesn’t take into account those facts that simply don’t fit into modern scientific theories?

Therefore, there’s a need to understand the following question: why do we, and by “we” I mean our entire civilization, believe that we have gone far in our development, but in fact  have still failed to understand even the basics?

Those very scientists still don’t see the whole picture of what electricity actually is, for example, and what gravity or a black hole is. And, nevertheless, they use these concepts. But in order to totally understand and discover the nature of these phenomena, it’s necessary to have a fundamentally different world vision, significantly different from a materialistic one.

There is such a direction called  dialectical materialism. If we try to give a short presentation of its basic concepts, then it approximately boils down to this: dialectical materialism is a philosophical doctrine that affirms the primacy of matter and foregrounds the three basic laws of its movement and development: 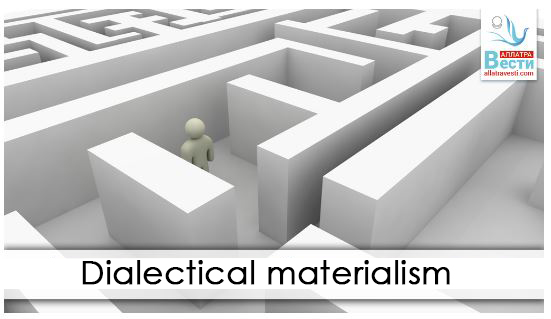 There are three real threats to humanity: the materialistic vision of scientists, the ignorance of priests and the chaos of democracy.

Why, for example, the idea of the ether, capable, in its study to practically  change life on the whole planet, is considered in official science taboo?

After all, people knew about the ether from ancient times, from ancient Indian philosophers and ancient Greeks up to the nineteenth century. Many remarkable scientists spoke and wrote about the world ether. For example, Rene Descartes, Christian Huygens, James Maxwell, Michael Faraday, Heinrich Hertz, Hendrik Lorenz, Jules Henri Poincaré and, of course, Nicola Tesla.

It was he who made a number of serious discoveries that showed the inconsistency of the materialistic theories which modern science relies on. When the financiers and industrialists realized that the getting free energy would lead to the destruction of their power empire, the science started destroying the ether theory on purpose. All studies on ether were stopped. Many scientists who defended the ether theory stopped receiving financial support, various artificial obstacles were created, for example, to close the laboratories, reduce scientific vacancies, create difficulties in the further employment, etc. At the same time, the world mass media started a massive campaign of discrediting ether, as one of the basic concepts of theoretical physics. Scientists with a “world name,” were foregrounded who claimed that all ether research topics were pseudoscience.

As a result, today, almost all modern science is based on the materialistic vision of the world cognition, and this is not true. 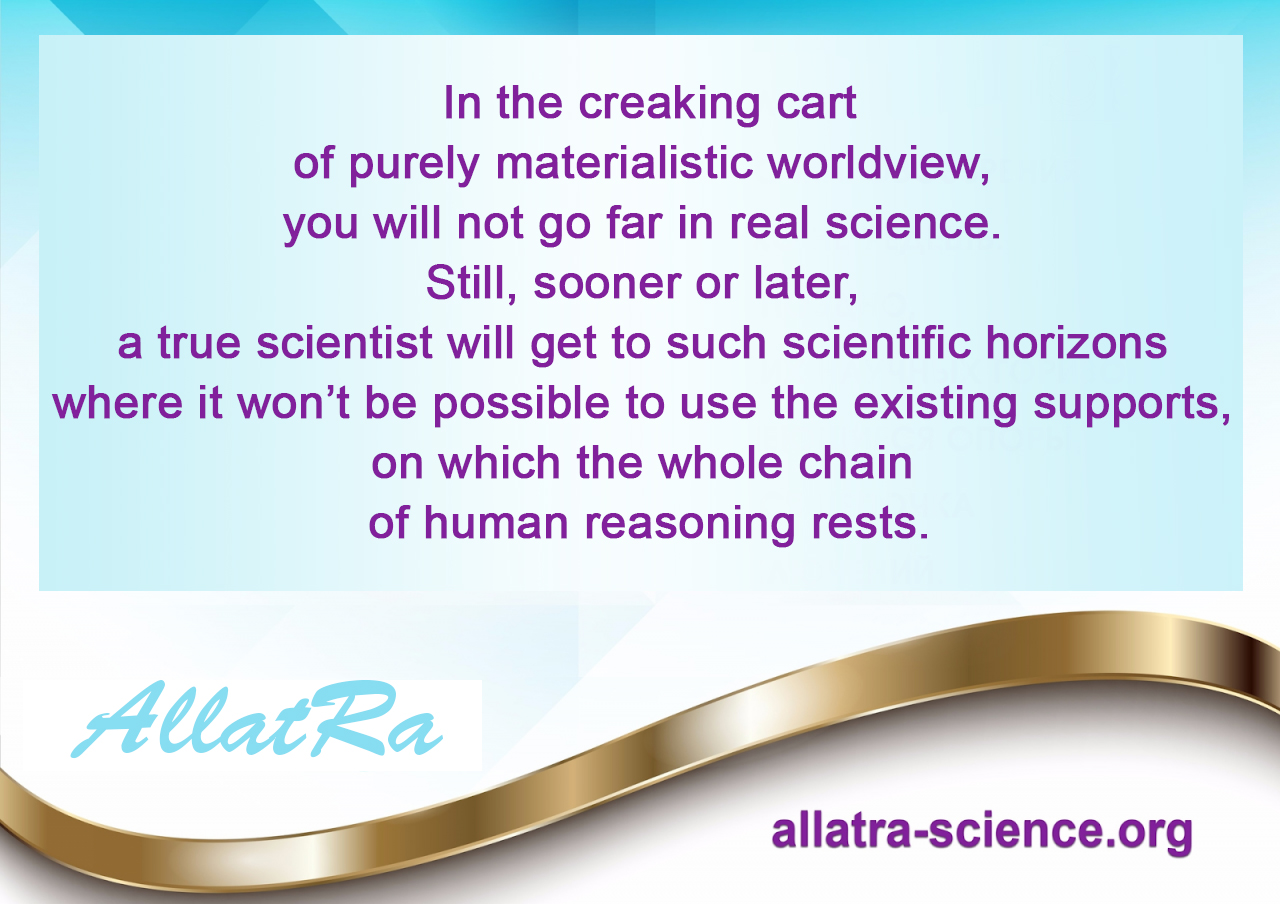 The fear of scientists to go against the system is understandable – it is a threat to lose not only their work, but also fear for their lives. More recently, it was fraught with the loss of personal freedom. There was such a joke: “Once Fedor, a Zen Buddhist, began to deny the greatness of Marxism philosophy. However, when he was called “where it was necessary,” he denied his denial there, thus making sure that the law of negating negation is valid. ”

As a result, scientists today spend many years to prove their hypotheses, and then it turns out that they are not true. Or maybe it’s their consciousness that takes them to such jungle that it is so difficult to get out of? After all, science, in particular, quantum mechanics, has come close to the question of an intangible beginning long ago .

Moreover, not all scientists claim the primacy of materialistic theories. For example, Arnold Fedorovich Smeyanovich, as well as Natalia Petrovna Bekhtereva, who wrote the following in her work “The Magic of the Brain and the Labyrinths of Life”: ”

It must be said that basing our biology on primitive materialism has led to the fact that we, in essence, have been working within a corridor bounded by invisible but very barbed wire. Even attempts to decipher the code of thinking, quite materialistic, as now our opponents recognize, were first met with criticism by”materialists”, whose idea boiled down to the fact that one can not find out the code of the ideal. But we were looking for the code of the material base of the ideal, which is far from the same thing. And yet – what is the ideal? What is a thought? It turns out, from the point of view of materialists, that it’s nothing. But in reality it does exist!

“Materialism is a willingness to recognize the authorship of a painting by brushes, paints, canvas, but not by an artist, “ writer Victor Krotov said.

Descartes postulated the existence of two different substances – bodily and spiritual ones. The question posed by Descartes on the interaction of the soul and body became the cornerstone of Western philosophy.

The extraordinary success of the theory of evolution in recent years has protected it from careful critical analysis. But this theory is not viable in the main thing. It is not capable of explaining why each of us is a unique being with self-consciousness.

And in the book “The Evolution of the Brain: Creation of the Personality,” Eccles said:

I believe that the mystery of human life is undermined by scientific reductionism, with its claims that” promising materialism “will sooner or later explain the entire spiritual world to the processes taking place in neurons, which should be considered as superstition. beings possessing souls and living in the spiritual world, as well as material beings possessing bodies and the brain and existing in the physical world.

George Berkeley in his “Treatise on the principles of human knowledge” claimed that only the spirit exists in reality. In Berkeley’s concept, matter is only an illusion that exists exclusively in the consciousness of a subject.

Another question arises: why is modern science so far from the life of ordinary people? After all, no answers have yet been given to the most fundamental and important questions for each person (which were mentioned at the beginning). Everything that will be investigated will not satisfy the Person, if the person is ignorant of the basis, there is no understanding: “Who am I? How do I live? What is the purpose of this all? and then what? “- then he is just a screw in the system of material values. But this is the most elementary thing. And, today, modern science is not capable of answering these questions. And how can we, in this case, consider ourselves civilized? Just because we can use a computer or drive a car? Or because we have laws? This video will dispel such illusions.

And people feel that something is wrong in the world. Everyone at least once thought about the meaning of his life and wondered: “Why?”. As if a person is sitting over a pile of puzzles, and the picture of how to collect them was not given to him. Today there are books and programs, through the prism of which the world can be seen differently. They give Knowledge, by accepting which you understand the essence. Like a breath of fresh air, they awaken you and remind you”why?”. And it’s interesting, that people who have read A. Novy’s book “AllatRa” and have watched the ground-breaking programme “Consciousness and Personality. From the inevitably dead to the eternally Alive “, in the majority say that they didn’t discover anything new, but as if recalled something they had long forgotten. These Knowledge have already changed the world and will change even more if there is a choice of people.

Taking into account the pace of life, reduction of time and so on, everyone has a unique opportunity for a short time to get the answers to these questions and acquire the Knowledge. After all, science, knowledge – should belong to all people on Earth, regardless of social status, level of prosperity, social classification and other conventions. Everyone can discover and learn the Truth. For you should know that:

Real science is the process of cognition of Truth, and not a means of achieving power.

When this information about the black hole  and about the heaviest microobjects in our material universe (and this can be done even with modern technology) is confirmed, these discoveries will not simply solve many unresolved issues of science, from the origin of the universe to the transformation of particles in the microworld .

This will radically change the whole understanding of the world’s structure from micro- to macro-objects and the phenomena of their constituents. This will confirm the primacy of information (spiritual component). Everything is information. Matter as such is not, it is secondary. What is primary? Information.

Understanding this will change a lot. This will create new directions in science. But, most importantly, people will answer the question of how people are actually structured. After all, the information about a person’s essence and the general energy structure being different from the physical body, is held back from people.

This understanding, in turn, will radically change the world vision of many people from the material to the spiritual one.

GAME OF PROFESSIONALS. What is consciousness? Film 5

ABSTRACT: Weakening of Earth's magnetic field is a harbinger of increase in frequency and severity of natural disasters. Changes in the tension of Earth’s magnetic...
Read more

How glaciers affect the climate of the planet? The catastrophic melting of glaciers in numbers. Fires beyond the Arctic Circle. What do respectable scientists...
Read more

To tell the truth or to lie? Researches: How kids’ perceptions...