Dear friends! The great interest in spiritual knowledge, which was evoked by the AllatRa book, as well as many people’s constructive activities for the...
Read more
Articles by Anastasia Novykh

The one who lives and acts for the sake of his or her soul and the spiritual future of all mankind is worthy of...
Read more
Articles by Anastasia Novykh

Every person, on a daily basis, whether consciously or unconsciously, in one way or another, exerts influence on people who surround him. But to...
Read more
Articles by Anastasia Novykh

A lot of problems occur because people still cannot identify the source of the origin of their thoughts in themselves, cannot distinguish the conductors...
Read more
Articles by Anastasia Novykh

Dear friends! The AllatRa book has been published as a print edition. It’s a fundamental book. It contains much primordial knowledge that activates the...
Read more

Many people are missing the most important thing in life, which is inner spiritual support. Everyone, depending on the kind of thoughts dominating in one’s consciousness, interprets this essential lack of “something important” in their own way. Some are saddened by lack of peace, some – by lack of happiness in their family, good relationships with each other, with children. Some are saddened by absence of a loved one in his or her life, some –   by not having their own house, material welfare, a good job, some suffer from not being able to find a good Teacher-Mentor in spiritual and other matters, and so on. But everywhere, we can observe the same phenomenon. The System of Animal mind conventionally orientates a person to search for something external even in the spiritual issues, which supposedly should be a support in the life of a person, at the same time distancing him in every possible way from self-creation of his spiritual inner base. That is why, in people a desire is born to lay all the responsibility for oneself, for one’s life onto someone else, even where it concerns spiritual matters. 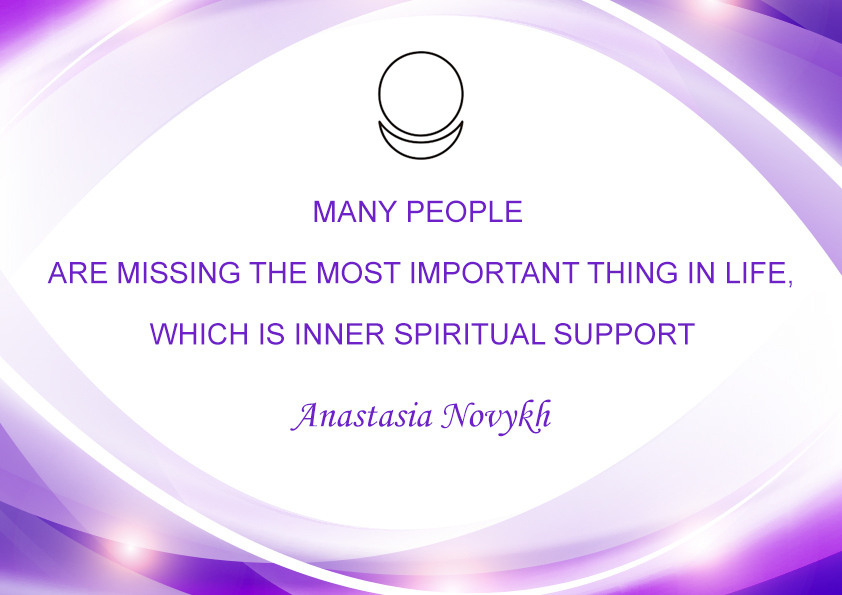 A focus on a search for something external in the material world has become so customary for a person that he does not even think who incites him to this provocation from the mind, substituting the real work on oneself, taking him away even from the very thought of forming a real spiritual support inside himself. In other words, to create that very life-giving inner connection with the spiritual world, due to which a person really lives and which a person relies on during his temporary existence in a mortal body in this material world with its illusory problems. It is thanks to the inner spiritual support that one feels what eternal life, true happiness, and true freedom are. By strengthening this connection with the help of spiritual practices and work on oneself, a person gradually realizes the essential difference between the real values ​​of the Spiritual world and the illusory “substitutions” of the Animal mind. Why, for example, does a person always look for an external Teacher who supposedly should guide him along the spiritual path, instead of finding spiritual support, a live dialogue with God through one’s deepest feelings within oneself?

I will give an example for better understanding. The book “AllatRa” has been published. Some people, coming across this fundamental Knowledge, start off by asking this question: “And who is Rigden Djappo?” Paradoxically, even people who are familiar with previous books, ask about this. Why do people ask this question and how should it be answered? Taking into account the knowledge provided in the book, it is not possible to give an unequivocal answer to the question who Rigden Djappo is. Because no matter how you call him, it will be just epithets. In general, we have to take into account that the question itself appears because the Knowledge given by Rigden affects the most hidden depths of a human soul and reveals much of what was hidden from a person. And a person, shocked by the Truth revealed to him, hurries to find an external support in this material world instead of forming his own inner spiritual support from it. That is why, one asks from his pride and incomprehension, “Who is he?” But one does not ask: “Who in me is asking this? Who am I really?” A truly spiritual person, when reading a book, feels and understands without a word who could bring such unique spiritual knowledge into this world and what a great importance it has for every living person. Epithets end when the deepest feelings begin. 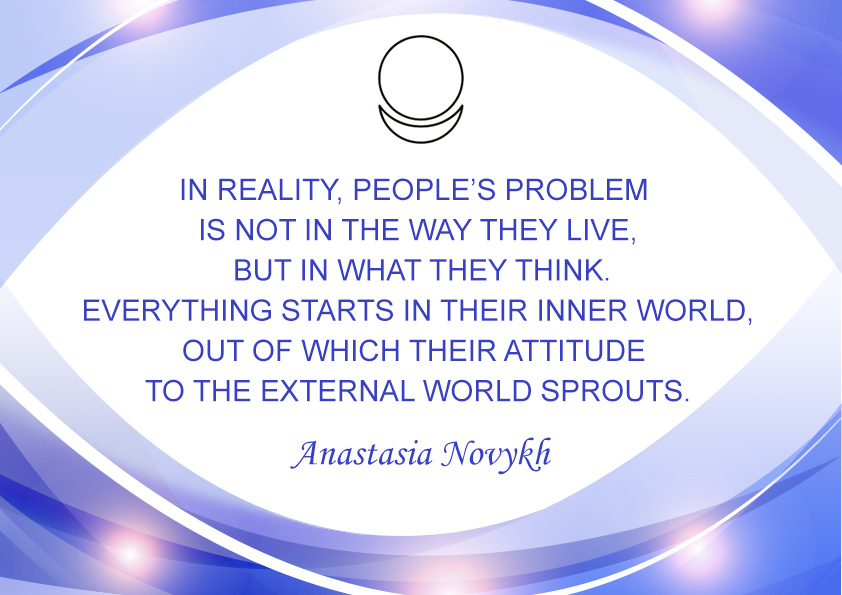 In reality, people’s problem is not in the way they live, but in what they think. Everything starts in their inner world, out of which their attitude to the external world sprouts. Why does a denial often arise in many people when they encounter manifestations of the true spiritual world in the material world? Why do various fears overcome people? Why does the Truth about their innermost cause the greatest fear in a person? What guides a person to consider himself to be an atheist? Why do secret doubts about God arise in many people even if they have been the proclaimers of one or another religion their whole life? What causes laziness in a person and fear to even familiarize oneself with the information, which radically changes one’s destiny? Why do many people try to apply spiritual knowledge not for the personal work on themselves, but for the strengthening of personal significance among other people? What motivates people, what is the main pattern of the Animal nature that ignores and criticizes the Spiritual nature, gives rise to all sorts of secret doubts and downright attacks, provocations via active conductors of the Animal nature?

If we delve deeply into the basis of all these confrontations that arise in a person and manipulate one’s consciousness, then we can see the main tool of the Animal nature – pridefulness, something that is opposed to any pure manifestation of the spiritual world, something that elevates the “I” above the Spiritual world. It is a scourge of the past and modern human society. It is pridefulness that illusorily exalts human delusion of grandeur (which is, in fact, the emptiness of the physical world, an informational pattern of the Animal nature), elevates the significance of the temporary material world over the significance of eternity of the spiritual world for a person, over the importance of the spiritual liberation and fusion with one’s own Soul. It is that very pridefulness that incites a person to secret as well as obvious manipulation of people, to persisting in defending one’s opinion narrowed by patterns of the material system. At these moments, a person thinks that he is proving his “authoritative opinion”, building his own “empire of influence”, “he is free in everything”. But in fact, at these moments, he actively asserts the positions of the Animal nature, subconsciously trying to return the awoken one (who is getting out of the system) into spiritual hibernation, to sow discord and doubt, to arouse the negative wave, which is food for the Animal mind. It only seems to such a conductor that he asserts the “right positions” quote unquote… of “his” stereotypes.

Such people, as a rule, consider themselves to be “self-sufficient” and do not see the need to work on themselves, not to mention to follow the spiritual path. They can use spiritual concepts, but behind their words, one does not feel the purity of thoughts and intentions, personal work on oneself. In fact, they just talk a lot, but advance in accordance with their personal secret desires in the opposite direction from their Spiritual nature. Unfortunately, in the moment of such aggressive surges of pridefulness, they do not even realize that at that instant they only serve as conductors of the Animal mind, which resists any surges of the Spiritual world in the material world and uses branches of its system for this. 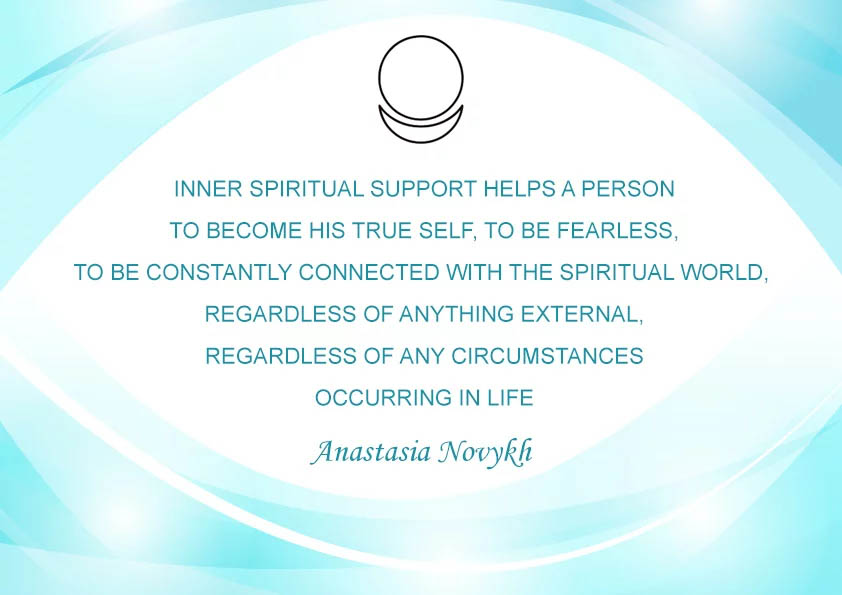 The material world for a person is a game of illusions, which create conditions for his inner choice, predestining his fate after death. Everything in the material world is relative, illusory, and transient; everything has its sudden beginning and unexpected end. In fact, there is neither past nor future for a person. There is only now, in which he asserts his choice. One has to hurry to create an inner spiritual support in oneself while one is free in one’s choice. Inner spiritual support helps a person to become his true self, to be fearless, to be constantly connected with the Spiritual world, regardless of anything external, regardless of any circumstances occurring in life. It makes a person real. It helps to reveal the substitutions of the Animal mind and its various attachments to the external temporary world. It forms a platform for creation. Thanks to it, a person becomes a pure Conductor of the Spiritual world in the material world, which allows him to convey the Truth and to sow the spiritual seeds wherever he is, whatever he does, whatever he comes into contact with. No matter what a person does in this world and who he is, he has to strive to form his inner support, the way to eternity, because life is too short. It is on this main life work that a person should concentrate his foremost attention, the rest will come and he will be given what to do and what to say when it is really necessary and important.

“To trade all of Eternity for only just one instant? What is the point here? To suffer in the arms of the beast’s skin, to serve the clothes decaying day by day. Is life in this? Life is infinite! It has no suffering, it does not tear, for it’s impossible to wear out the Soul. The clothing has no Home; there is just a closet where it is kept for only a short while. Only the Soul has a true Home. And it’s the Soul that, yearning for Eternity, begets this sense of Home, for which man searches his entire life.”

German Finance Profesionals on Developing a Fair and Constructive Society

Finance professionals from Germany give feedback on the international conferences: „Society – the last chance“ and „For a creative society“ and discuss the current framework...
Read more

IRELAND, ALINA. I have understood how consciousness tries to seem better and where the truth lies. REALIZATIONS. LIFE VLOG

The participant of the ALLATRA International Public Movement  - Alina, Ireland, in the LIFE VLOG format  shares her awareness of how the system operates...
Read more

“The knowledge of the PRIMORDIAL ALLATRA PHYSICS allows oneself to look behind the secrecy curtain of the structure of the material world, to learn...
Read more

You are a student or a young scientist? And are searching for grain of knowledge in various sciences? Or maybe you are a regular...
Read more