Text version of the programme “CLIMATE. THE FUTURE IS NOW” with the participation of Igor Mikhailovich Danilov. Part 1.

Is your life going to be the same in today’s natural disasters? Cataclysms happen more often today. They are unpredictable, more intensive and a lot of natural disasters took place in 2018. The number of climate change refugees grows extremely. Tomorrow this may happen to you, your home and your family.

The reality of cataclysms and global climate change

THE REALITY OF CATACLYSMS. HOW IS PEOPLE’S LIFE CHANGING?

The report “On the Problems and Consequences of Global Climate Change on Earth” – this is the ultimate reality of today. We can only state the fact that the events described in the report are becoming the reality within the specified timeframe.

In fact, humankind has even less than 50 years! 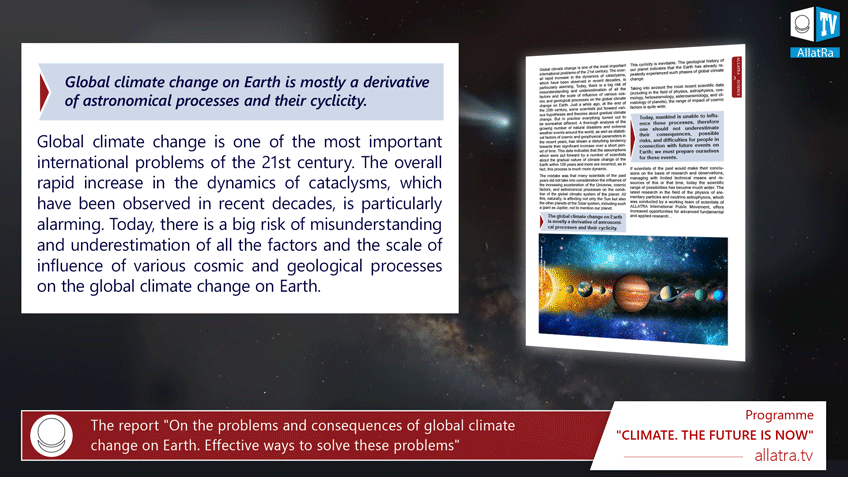 Global climate change on the planet is one of the most acute problems of the 21st century. 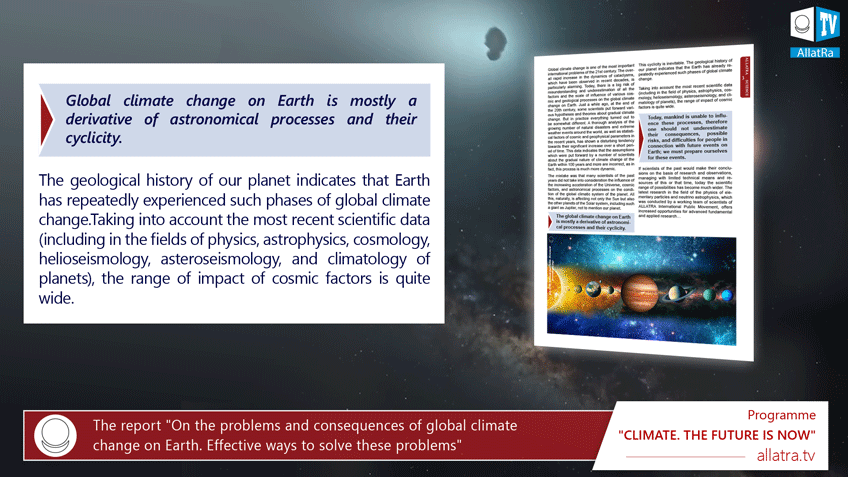 Climate change is the result of astronomical cyclic processes beyond human control. 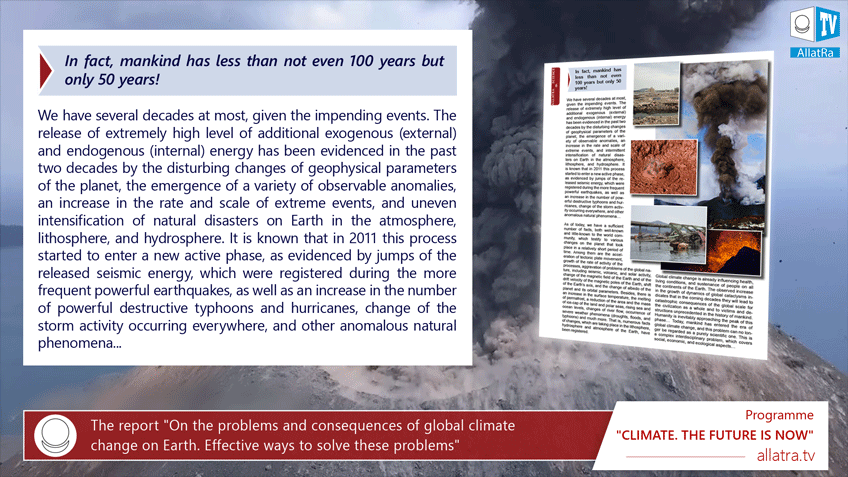 Humanity has very little time left to consolidate efforts of the entire world community in the face of inevitable global climatic changes. 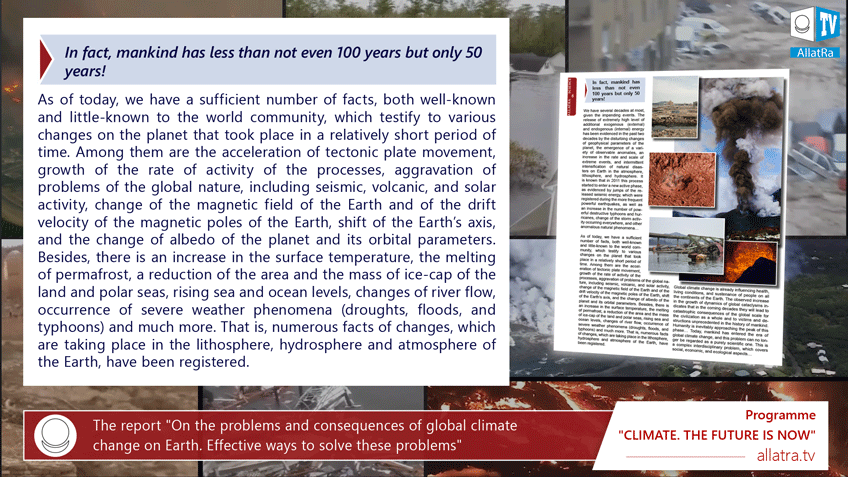 Facts confirm that significant changes have occurred in the atmosphere, hydrosphere and lithosphere of the planet in recent years.

Seismic activity is increasing around the world. The geography of earthquakes is expanding. Their frequency and magnitude increase significantly. The unpredictability of earthquakes causes tremendous damage to the population of the affected regions. 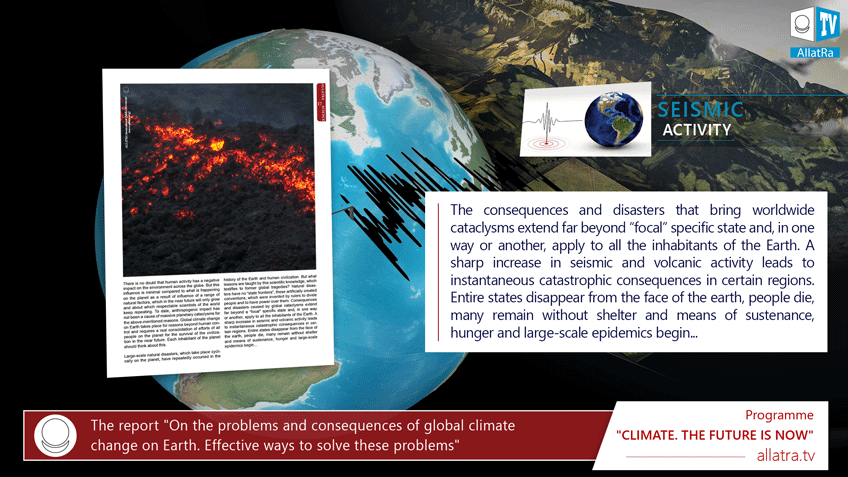 Climate change results in worldwide disasters that affect absolutely all the inhabitants of the planet. 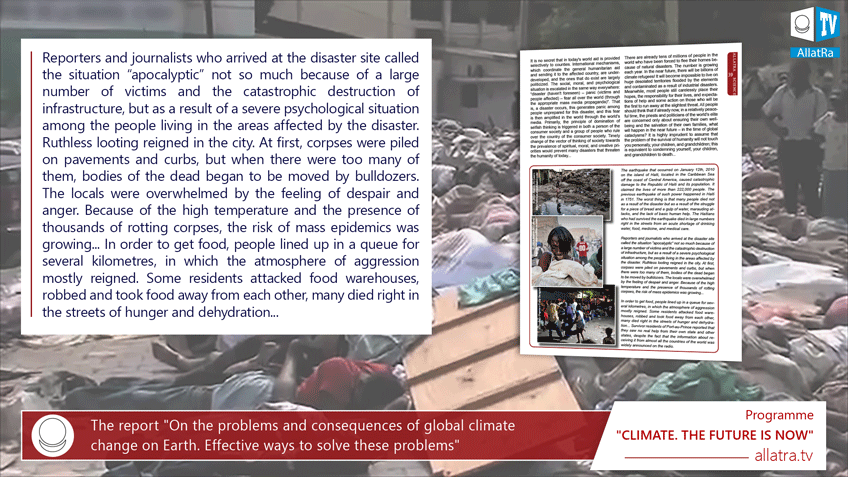 Consumer society is not able to survive in the era of global cataclysms.

Cracks and faults in the earth

New tectonic continental faults are forming on the planet.

A sudden appearance of giant cracks and gaps is being observed all over the world. A serious deformation of the Earth is happening. 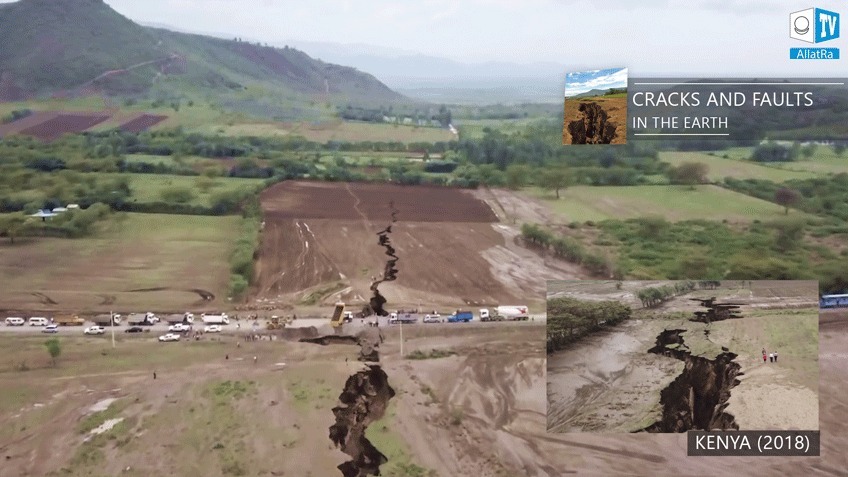 The largest cracks in the earth that arose in 2018: NEW ZEALAND, PERU, SAUDI ARABIA, IRELAND

Tornadoes: the merciless force of nature

The merciless force of nature strikes settlements, destroying everything in its path. Tornadoes are getting stronger, and today they can already be observed in regions that are not typical for them. 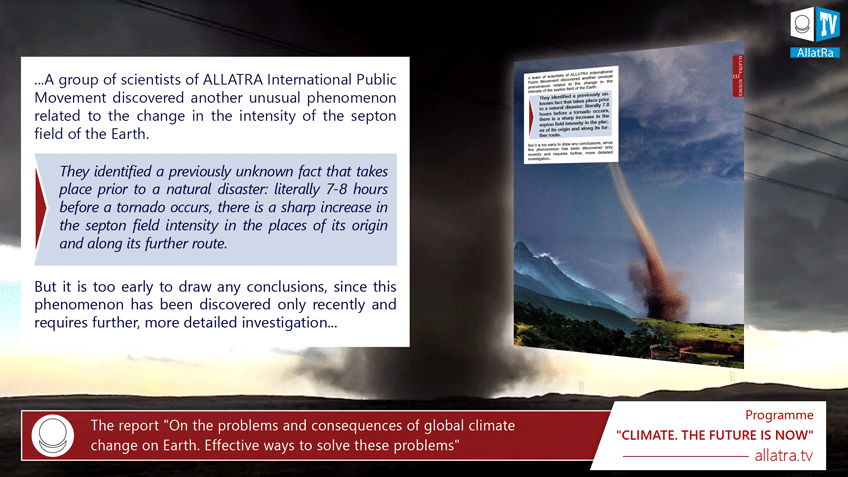 A working team of scientists of ALLATRA International Public Movement discovered a phenomenon whose further study can enable science to predict the place of origin and the trajectory of the tornado.
Destructive Tornadoes in 2018: ITALY; CYPRUS; WASHINGTON; USA.

Pyroclastic clouds, mud flows. They pose a threat to nearby settlements, forcing people to leave their homes and depriving them of their livelihood.

Misfortune never comes alone. Volcanic eruptions are accompanied by high seismic activity. They provoke formation of landslides and cracks as well as development of tsunamis. They lead to crop failure, hunger, and disease, as well as accelerate global climate change on the planet.

Fires and abnormal heat as consequences of global climate change

Destructive giant wildfires. Abnormal heat. Hurricane wind. Fires burning down entire cities. The fiery force of nature, against which people found themselves helpless despite all their technical advancements of modern civilisation. 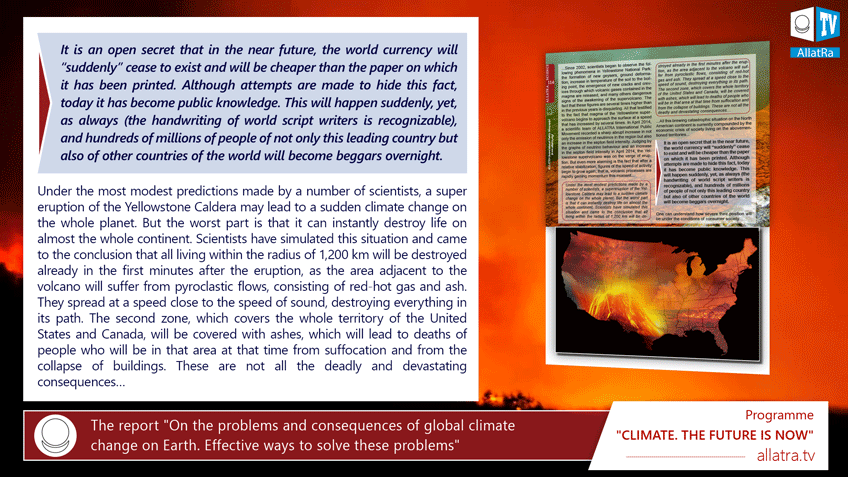 The eruption of the Yellowstone Caldera can not only dramatically accelerate climate change on the planet, but also cause catastrophic consequences for civilization.
Disasters are on the rise, and we are unable to withstand them. This cannot be avoided. In the face of a global disaster, the entire civilization with its vaunted technical progress is nothing but a big soap bubble, helpless in front of nature.

Abnormal frosts and large hail. It’s all about natural disasters in 2018

Snow falls even in the deserts. Africa, Europe, America… There are sharp temperature fluctuations on the planet. Record frosts and snowfalls paralyse the life of entire regions. 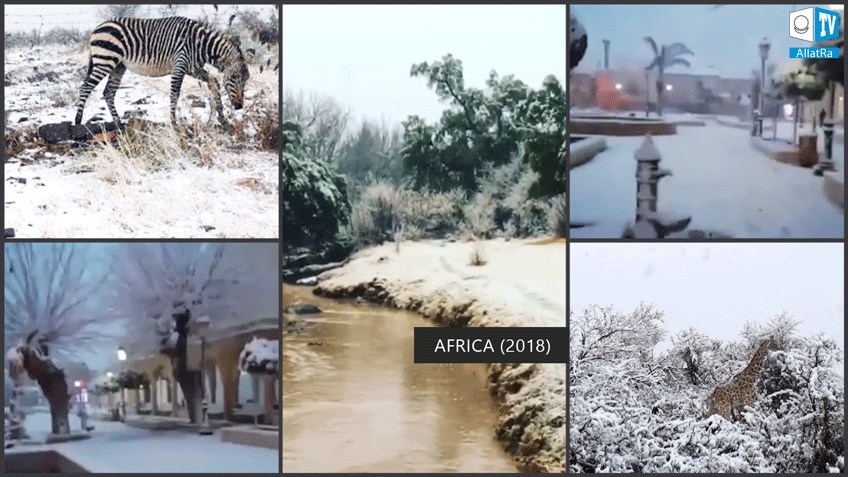 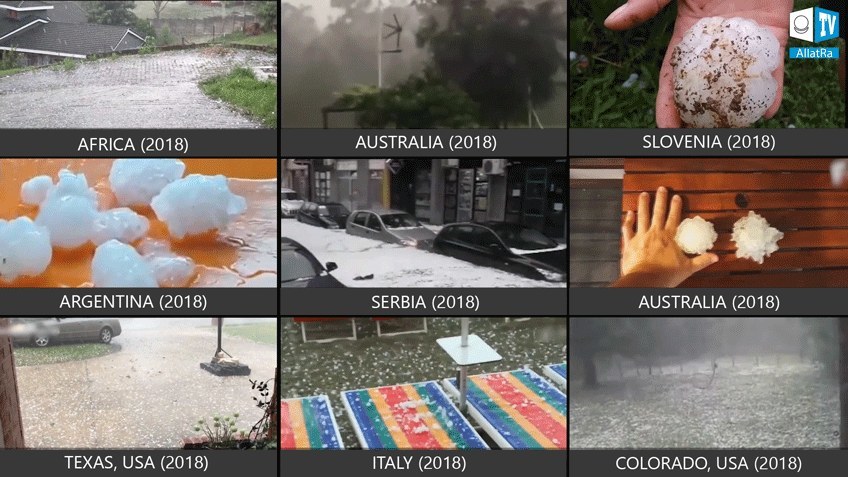 Consequences of the magnetic poles shift

Anomalously rapid shift in the North magnetic pole relative to the South pole of the Earth. These significant changes cause serious problems not only in the failure of navigation equipment, but of other electronics as well.

What extreme consequences can this lead to in the near future? 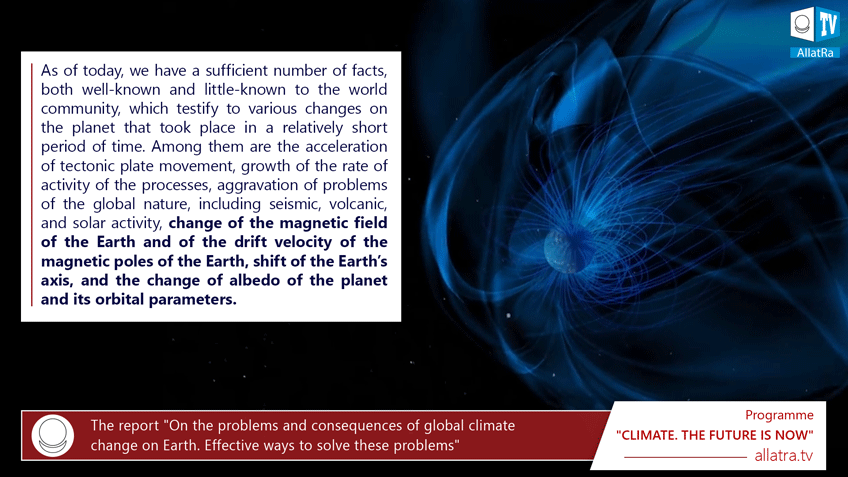 The drift velocity of the planet’s magnetic poles has increased. 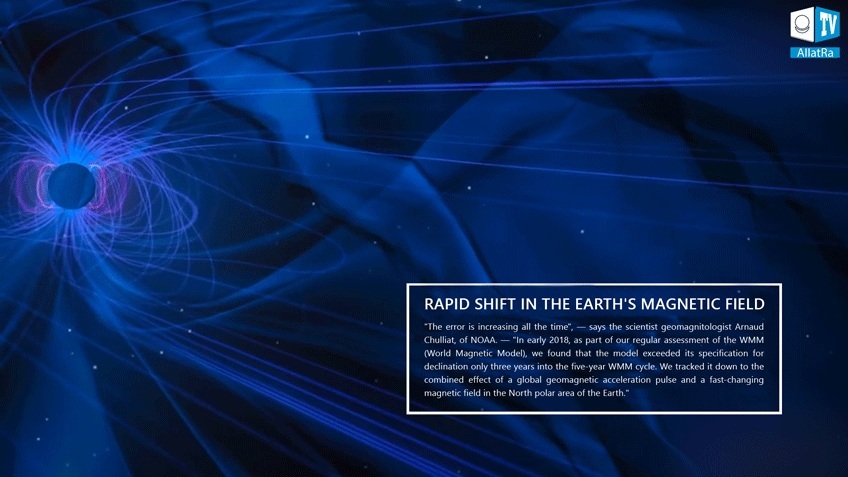 “The error is increasing all the time,” – says Arnaud Chulliat, of NOAA. – “In early 2018, as part of our regular assessment of the WMM (World Magnetic Model), we found that the model exceeded its specification for declination only three years into the five-year WMM cycle. We tracked it down to the combined effect of a global geomagnetic acceleration pulse and a fast-changing magnetic field in the North polar area of the Earth.”

Sharp increase in temperatures on Earth – what to expect?

Glaciers are rapidly melting at the poles. A sharp increase in temperatures has led to a prominent reduction in the size of sea ice extents. This results in the rise of the global sea level and changes in the ecosystems. 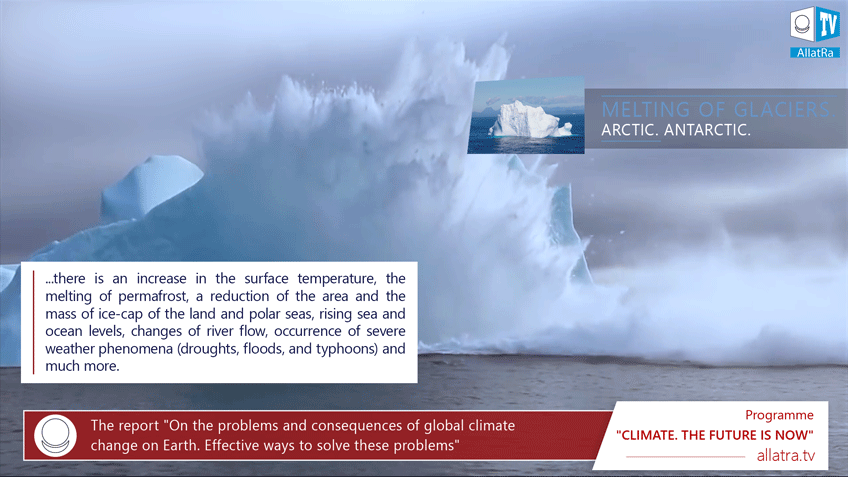 The rapid decrease in the area of glaciers entails even more serious climate change.
Reduction of the area of sea ice in the Arctic. An increase in the rate of melting of the Greenland ice-cap. Over the past five years, the rate of ice melting in Antarctica has tripled. A group of glaciers, covering one eighth of the coast of East Antarctica, began to lose ice. All this will inevitably lead to widespread changes in the ocean.

Climate is changing, and tomorrow your normal life will change beyond recognition. Are you ready for this? 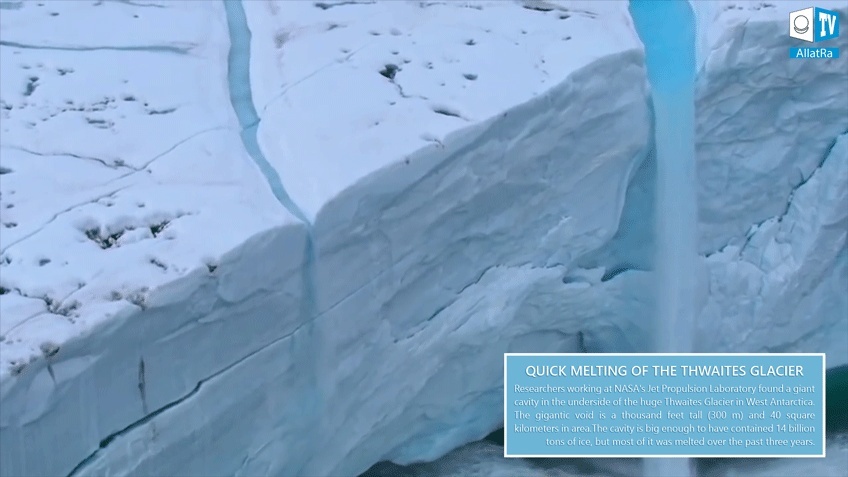 QUICK MELTING OF THE THWAITES GLACIER. Researchers working at NASA’s Jet Propulsion Laboratory found a giant cavity in the underside of the huge Thwaites Glacier in West Antarctica. The gigantic void is a thousand feet tall (300 m) and 40 square kilometers in area. The cavity is big enough to have contained 14 billion tons of ice, but most of it was melted over the past three years.

Natural disasters overlap one another and change life of everyone

This affects all aspects of people’s lives and their safety. There is a threat to health and life, shortage of food and fresh water, loss of property and livelihoods.
What is it like for those who have survived to start their lives all over again? 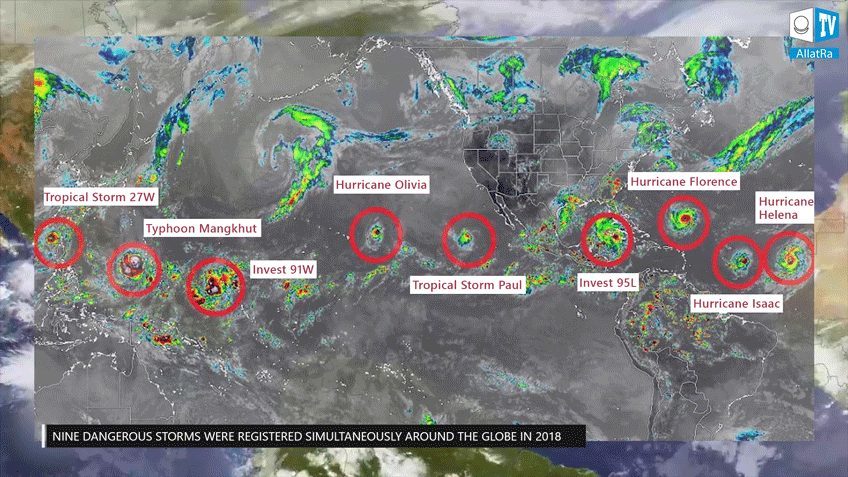 Nine dangerous storms were registered simultaneously around the globe in 2018

In the consumer society, even with humanitarian laws on paper, every victim remains facing in a practice their own troubles and problems afterwards. 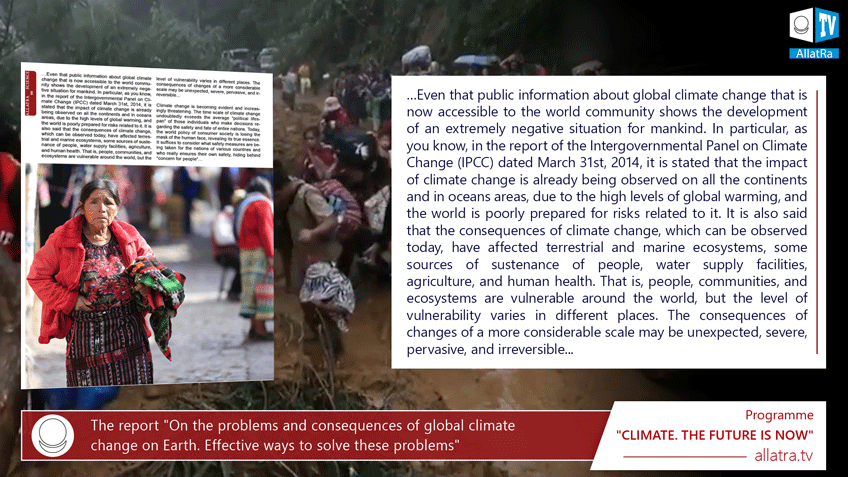 Climate change: the consequences are already being observed across the planet.

Heavy rains and downpours cause terrifying sudden landslides and mudslides. They take people by surprise. These natural disasters bury roads, buildings and entire localities under the ground.

Landslide in the USA, California
The most devastating landslides in 2018: California, USA; China; Switzerland; Indonesia; Italy; The Philippines.

Thousands of tons of ocean water sweep away everything in their path. As disasters strike, they result in the death of people, leaving behind uninhabitable coastal zones. Tsunamis entail a threat of environmental catastrophe. 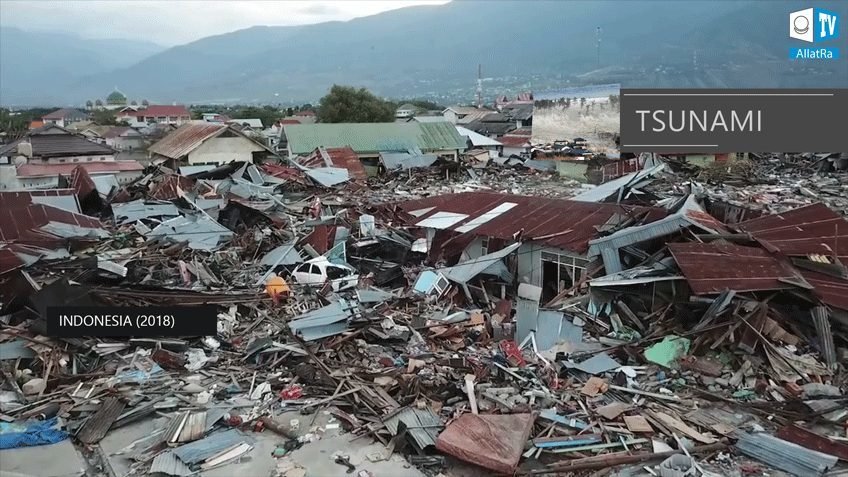 The consequences of the devastating tsunami in Indonesia. (2018) 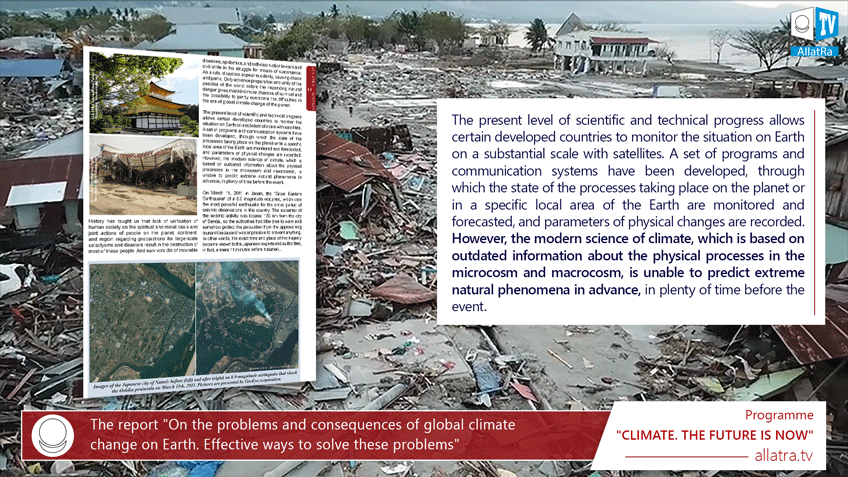 “To date, modern climate science, based on outdated information about physical processes in the micro and macro world, is not able to predict extreme natural phenomena in advance, with a large margin of time before the event.” Climate report of ALLATRA IPM.

Climate is changing. And it will only get worse in the future. Everyday life of everyone will change beyond recognition. Are you ready for this? To lose your family, your loved ones, your home, and your belongings? What have you done today to make tomorrow different for you and your family? 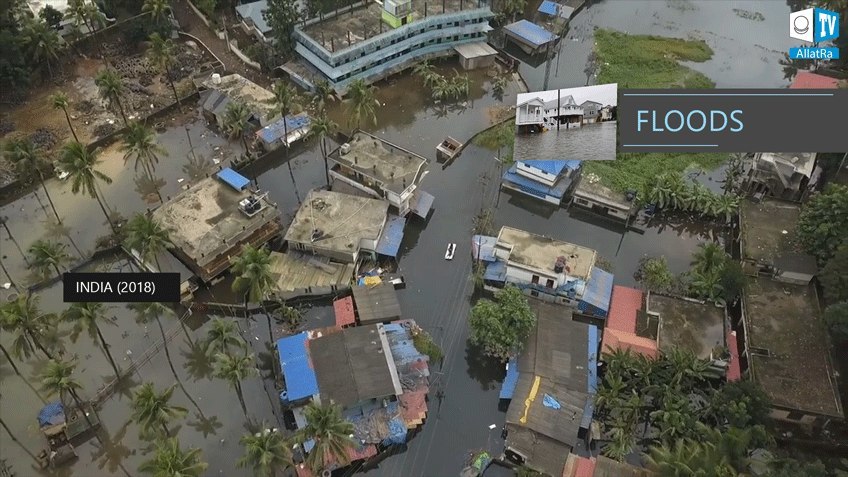 You are watching just a video, and your consciousness is saying that “this doesn’t concern you”. While someone is going through it right now. Can you be sure that tomorrow this won’t happen to you, and you won’t be a part of similar disasters? And someone will be watching a video with your participation and, just like you now, will doubt that this is happening. 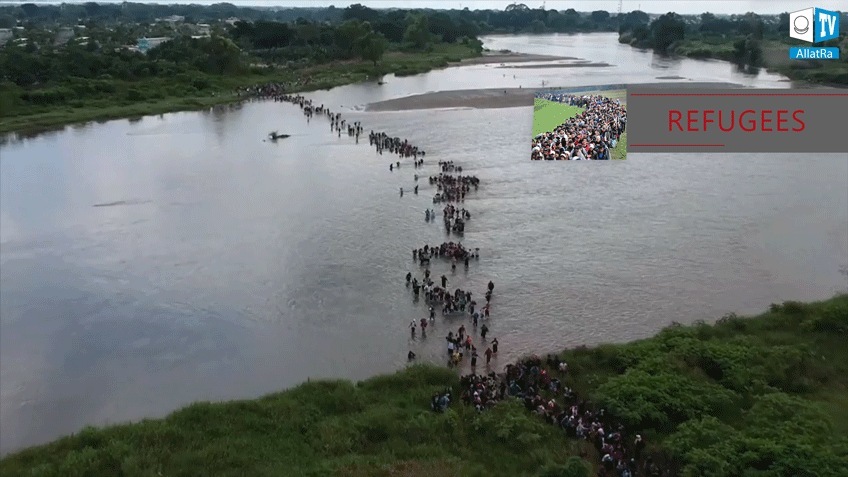 Can you be sure that tomorrow this won’t happen to you, and you won’t be a part of similar disasters?
Refugees. People without bread, without a penny in their pockets are forced to illegally migrate to other countries in order to survive. While you are now being warm and comfortable. Consciousness is telling you, “Who needs poor beggars, and, even more so, in my house?!” But the truth is that this is a common misfortune, and it will affect everyone, including you. And tomorrow you, together with them, will be looking for a safe place to survive.
Now you are looking at this as at something alien. But tomorrow you’ll be forced to walk among this crowd. And after tomorrow you’ll be forced to leave together with those whom you came to and who wasn’t happy to see you.
You wonder why this is happening now? Where is the civilised attitude towards people? Where is the help of international organizations that must take care of people? Where are they? Where is it all here and now? 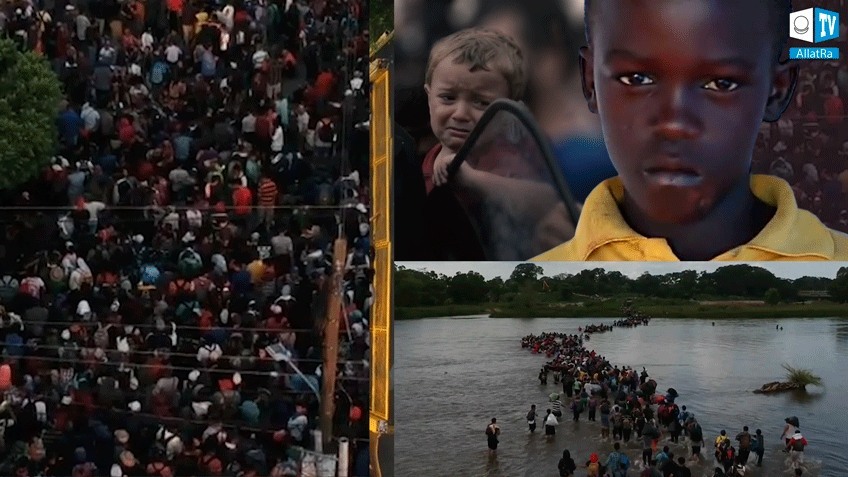 Now you are looking at this as at something alien, but tomorrow you’ll be forced to walk among this crowd.
The truth is that the bureaucrats, to whom the society entrusted the solution of these problems, are also people of consumer thinking who sit and watch videos in their cozy offices, and instead of actually helping people, they keep writing fakes for the world mass media. But the reality is that already tomorrow they will be walking alongside you, among the crowd of refugees, and repent that they did nothing when they had the opportunity to change a lot. And this is as inevitable as the sunrise.
All you’ve seen is just a part of the events that took place within one year. And if you don’t want to notice this, if you turn away from other people’s misfortunes, then it doesn’t mean at all that tomorrow this won’t happen to you, your home and your family. 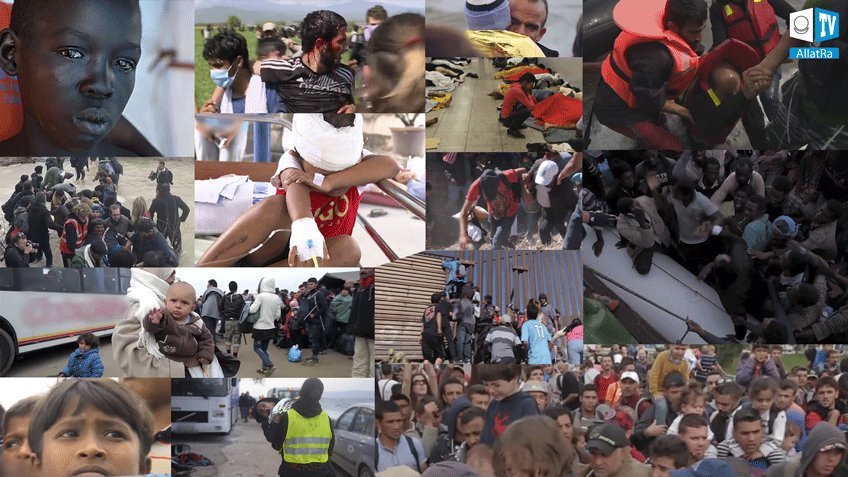 And if you don’t want to notice other people’s misfortunes, then it doesn’t mean that tomorrow this won’t happen to you. 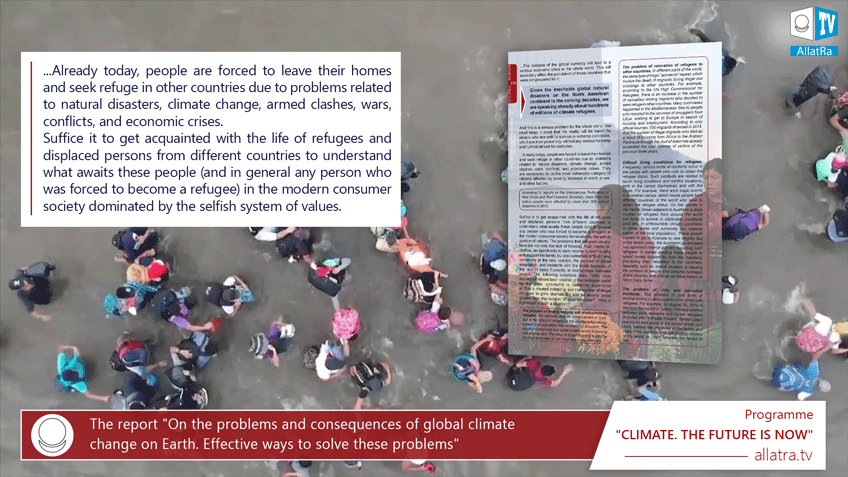 Today, a huge number of people already have become refugees due to the problems associated with global climate change, military conflicts and economic crises. 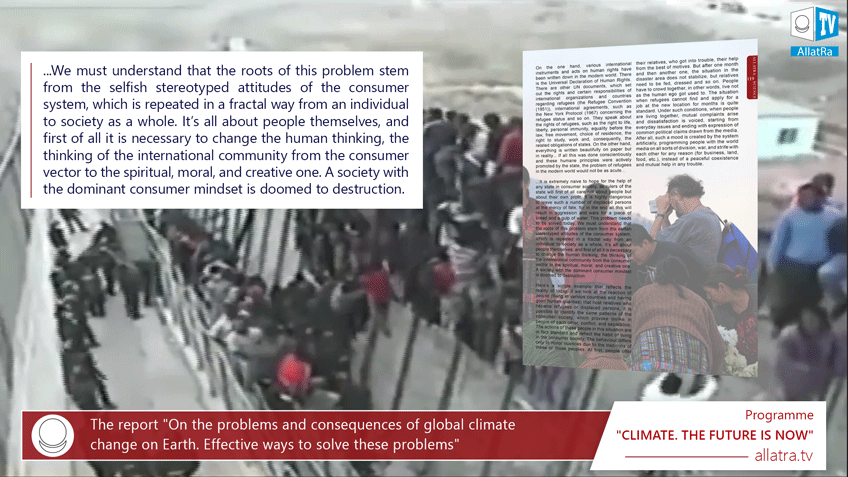 The root of all the problems of today is in the consumer format of society. Only people themselves can change this by changing their thinking in the spiritual and moral vector. 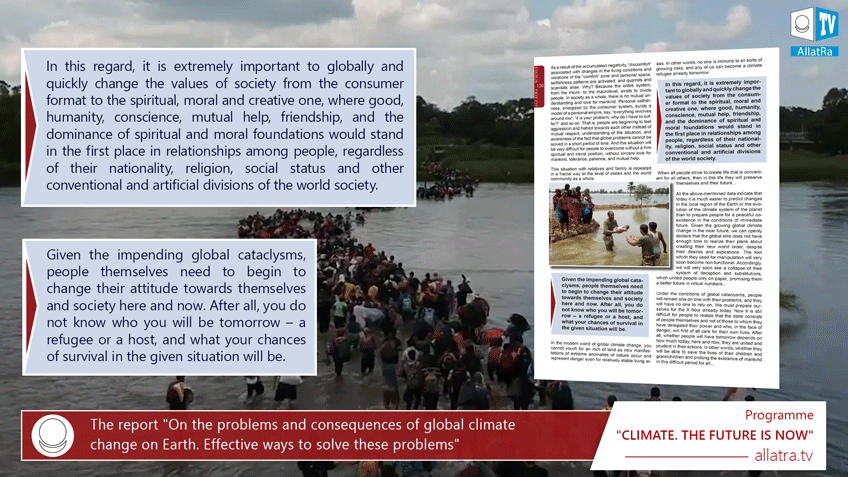 “In this regard, it is extremely important to globally and quickly change the values of society from the consumer format to the spiritual, moral and creative one, where good, humanity, conscience, mutual help, friendship, and the dominance of spiritual and moral foundations would stand in the first place in relations among people, regardless of their nationality, religion, social status and other conventional and artificial divisions of the world society.
Given the impending global cataclysms, people themselves need to begin to change their attitude towards themselves and society here and now. After all, you do not know who you will be tomorrow – a refugee or a host, and what your chances of survival in the given situation will be.”
Next article: “What is happening to the world – global climate change is inevitable”. Part 2.
Source
AllatRa TV
170
Facebook Twitter LinkedIn VKontakte Odnoklassniki WhatsApp Telegram
Facebook Twitter LinkedIn Pinterest Reddit VKontakte Odnoklassniki WhatsApp Telegram Share via Email Print

Our future depends on social responsibility of each of us

End of Times or Golden Millennium depends on people’s choice

What is happening to the world – global climate change is inevitable

Our future depends on social responsibility of each of us

End of Times or Golden Millennium depends on people’s choice

What is happening to the world – global climate change is inevitable

What is happening to the world - global climate change is inevitable