Rigden: People are divided by matter and its needs, that is, by the Animal nature. But if people are guided by their Spiritual nature, then collectively they will be able to overcome any differences among themselves.  Perhaps, I will share an ancient Eastern parable about two brothers, which tells a story about the human choice and its consequences.

“Once long ago, in one settlement, two twin brothers came into the world. Although they were born within minutes of each other, for the rest of his life the firstborn considered himself the elder and therefore, smarter.

When the brothers grew up, it so happened that one traveller stopped for a night in their house. He turned out to be a Spiritual and a Wise person. At that time, the people of this settlement were at war with neighbouring people. This war brought a lot of grief to the people. But nobody knew how to avoid the war and death. And the brothers asked the Wise man for advice.

The Spiritual man, after listening to them, told them simple truths about the essence of life and death. He told them what happens in the world of people, about the nature of human’s duality, what keeps him in the chains of ignorance, and how to break free from them. He spoke about how to find the true way, save one’s Soul, and come to that which lies beyond life and death. In the end, he said: “It is only possible to become free from death when one knows the Truth. The Truth is a domain of the inner. The Path to the Truth is a domain of the outer. And only having walked this Path, will you know the Truth and become free from death.” But each of the brothers understood the words of the Wise man in his own way. And each chose his own Path to save his Soul.

The elder brother decided to perfect himself in spiritual knowledge. He left his native land to avoid participating in the war. Visited many countries, where he studied religions of the local peoples and chose from them what he considered to be the best, that which would lead him to attaining the “property of the inner.” Eventually, he gained most diverse knowledge and experience and so succeeded in his endeavours that he considered himself an Enlightened man endowed by the goodwill of the Chosen one. Moreover, he so believed it himself that many people believed him and began to learn from him.

The younger brother went to the people and began to tell them the simple truths he had heard from the Wise man. Some people listened to his words. Others laughed, thinking that everything in this world is decided by rulers, who listen to the gods’ advice. But soon even those who laughed at him began to listen to the young man’s speeches because his words were honest – there was the Truth in them. And people told him that they did not want the war, they did not want to kill anyone and did not want to die themselves. But what were they do, for they were forced to fight by their rulers? To which the young man replied: “If rulers can destroy but cannot create, what is their merit? If they cannot resurrect the dead, how can they condemn the living to death? Any person can cut off a branch from a tree, but only a Master can attach it to the tree. And the ruler is only human. He is also afraid of death, just like any of you, so he is hiding behind the lives of his warriors, issuing decrees. But his decrees are executed by you. The ruler is one, while you are many. He deceives you, saying that he is strong, for his power is you, doing his will against yours. If people lay down their arms, there will be no one to fight. The power of a mountain is not in the stone lying on its top but in its monolithic nature.” And the people were inspired by that wisdom and shared it with the neighbouring people, with whom they were at war. The Truth was heard. And everyone laid down their weapons. So, in that place, thanks to the ordinary young man who had shared the true word of the Wise man with the people, the war stopped and peace came. And many lives were saved by the Truth, and many found a Path to it.

But time passes quickly. Gone were the earthly years of brothers. As they were born on the same day, so they died. Thanks to tireless zeal, the elder brother reached such heights in his spiritual perfection that he could appear before the Guardian himself, behind whom towered the Chinvat bridge. And he was allowed to behold with his own eyes his younger brother cross this bridge and the Gatekeeper thrust open before him the Gate of Eternity. And the highly spiritual elder brother was so amazed by what he had seen that all his subsequent nine reincarnations he firmly followed the spiritual path of the younger brother, keeping the memory of what he saw and telling people about it.”

Parable about the branch of doubt 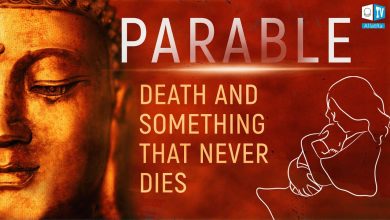 Parable “Death and Something that Never Dies” 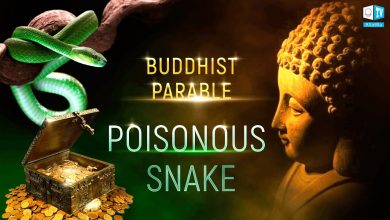 A Poisonous Snake. A Buddhist Parable