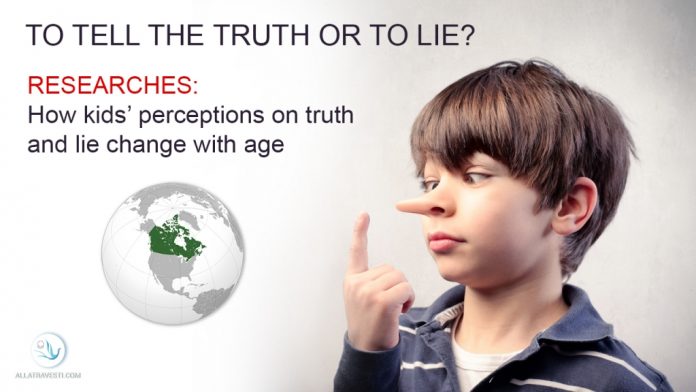 Canadian scientists have found that younger children have a binary take on truth and lies – while older children take intent and outcomes more into consideration.

Victoria Talwar, a Canada Research Chair in McGill’s Faculty of Education with the Department of Educational and Counselling Psychology, led a research team that was interested in how a child’s moral understanding develops. They studied the behaviour of close to 100 children, aged 6 to 12.

The researchers showed the children a series of short videos in which childlike puppets either told the truth or lied. The variable was the outcome of the puppets’ words: sometimes what they said caused harm to someone else (e.g., blaming an innocent person for their own misdeeds). In other scenarios, the speaker’s words harmed themselves while helping someone else (e.g., a false confession to a misdeed in order to spare the real perpetrator from punishment). The videos also portrayed puppets telling truths, such as “tattling” could harm someone else. After watching the videos, the children were asked to decide whether the characters were being honest or deceitful. They were also asked to decide whether the puppets’ behavior should be rewarded or condemned.

Professor Talwar explains, that looking at how children see honesty and deceit is a way of gaining insight into different stages of moral and social development. Children get a lot of messages from their parents saying that lying is always bad, but at the same time they see their parents telling ‘white’ lies to make life easier. Depending on their age, this is likely to be a bit confusing for children. The researcher points out: “We were interested in gaining a more nuanced picture of children’s perceptions of truth and lies – since not all lies have negative consequences for the other person, and not all truths have positive consequences for someone else. We were curious to know at what age children start to understand this.”

The researchers discovered that the children had no difficulty, no matter what their age, in distinguishing truth from lies. They were also adept at deciding which behaviour to reward or condemn – with two notable differences between younger and older children.

E.g., false confessions to help someone else were difficult to assess; younger children saw these as being more negative than older ones did. In other case younger children were less concerned by truth-telling that had negative consequences for someone else, whereas older children were more conflicted about tattling. “Younger children see things more starkly – truths are good and lies are bad. But by the time they are 10-12 years old, children become more aware that truth and lies are less binary,” says Shanna Mary Williams, who recently completed her PhD at McGill and did much of the research on this study.

According to the research scientists concludes that children’s moral evaluations of both lies and truths is influenced by their understanding of whether the speakers’ intention is to harm another or themselves. While younger children may be reflecting what is taught by parents and caregivers when it comes to tattling (i.e. that honesty in all forms is virtuous), the researchers believe that older children may be less likely to reward tattling because they are concerned with how their peers will perceive this behaviour. In both cases, what is clear, according to the researchers, is that parents and teachers need to have a much more involved conversation about truth-telling or lie-telling with children.

It is worth noting that the scientists chose for their research the most interesting age groups. It is known that at the age of 5-7 years and 11-14 years occur power surges, that affect the entire body. But until now, the official science doesn’t know the reason why these bursts occur, and how important they are for the development of personality. Echoes of the knowledge about the stages of development of the human personality can be found all over the world, in the spiritual teachings of various peoples. If you take into consideration modern sources, the most complete and detailed information on this topic is presented in the book “AllatRa”. For example, there are some interesting facts in the book:

Rigden: …I have already mentioned that a new Personality in a new body is more or less formed by the age of 5-7 years, and this is when the primary surge takes place in it. Then, by puberty – at the age of 11-14 years old (this is individual for each person) a second, stronger energy surge occurs. These surges are, basically, manifestations of the power of the Soul, which are initially directed at helping the Personality find ways of spiritual liberation. But power is power, and it is important through which prism of thinking it passes and where it is later redirected. This is why in these years for the new Personality, its environment is important as well as, first of all, the worldview, words, and actions of the people with whom it is in contact on a daily basis and from whom it absorbs everything like a sponge – both the bad and the good, recording this information on its blank slate of consciousness. These primary layings are imprinted on the further life of the Personality and indirectly influence its life choice: the spiritual or material one, which will be dominant in it and, consequently, will determine its destiny after death.

Research of the scientists from McGill University shows the state of modern society, its priorities, the basic moral values. The results of the experiment show that the “white lie” is considered acceptable. It seems to me that such a harmless model of behavior leads to the tragic consequences that we have seen across the planet – the separation of people and cultivating of the consumer ideology. A person should be aware of the consequences of his statements. It becomes easy and natural to tell the truth, if a society has Primordial Knowledge about the dual nature of man; because a person, who work on his spiritual development, in any case, will know exactly what he should do to help another man and to be honest. It is important to remember that even a small concealing the truth may subsequently lead to significant distortions of information.

Pedro from Birmingham is very pleased to participate in ALLATRA International Public Movement. He also shares his experience of reading the AllatRa book. He...

Today, the majority of the world population is far from being in the best living conditions. Masses of people endure deprivations, restrictions, the percentage...
Read more

Care for each other can unite all people. Salah Mohamed Salah, Nursing Ambassador, Egypt

Interview with Salah Mohamed Salah, Nursing Ambassador from Egypt. Salah studied nursing and was engaged in many international activities of the UN and volunteered for...
Read more

You say that the situation is serious, that the Personality is under information and not only pressure. How to help the Personality? (1:56:35) Igor Mikhailovich:...
Read more