Have we ever asked ourselves what unification of people is? Have we realized what power this phenomenon carries in itself? Do we know how much of a key factor it can be in global issues concerning all humanity, in the survival of civilization? Based on the current situation in the world today — we do not know. If we knew, we would not have come to such a crisis in society, to total self-destruction, we would not have fought and killed one another, we would not have shifted responsibility to others, and we would not have failed to act.

As of today, the existence of the entire civilization has come to a critical point. The presence of previous crises, along with constant deterioration of the world economy, has repeatedly brought to light the vulnerability, imperfection, and impending quick collapse of civilization in the consumerist format of relationships. Now this has been definitively confirmed by the very fact of the impasse in which we, as humanity, find ourselves today.

The structure of the consumer society leads to division of the population, competition for resources, creation of precedents for conflicts, and causes wars. Given the state of disunity that pervades all of society, all of humanity, it makes sense for everyone to ask themselves: don’t we, as a civilization, want to have a future? Do we want to leave a world of separation, enmity, war and fratricide to our children? Do we not see that the world of consumerist ideology has come to an end and something has to be changed? 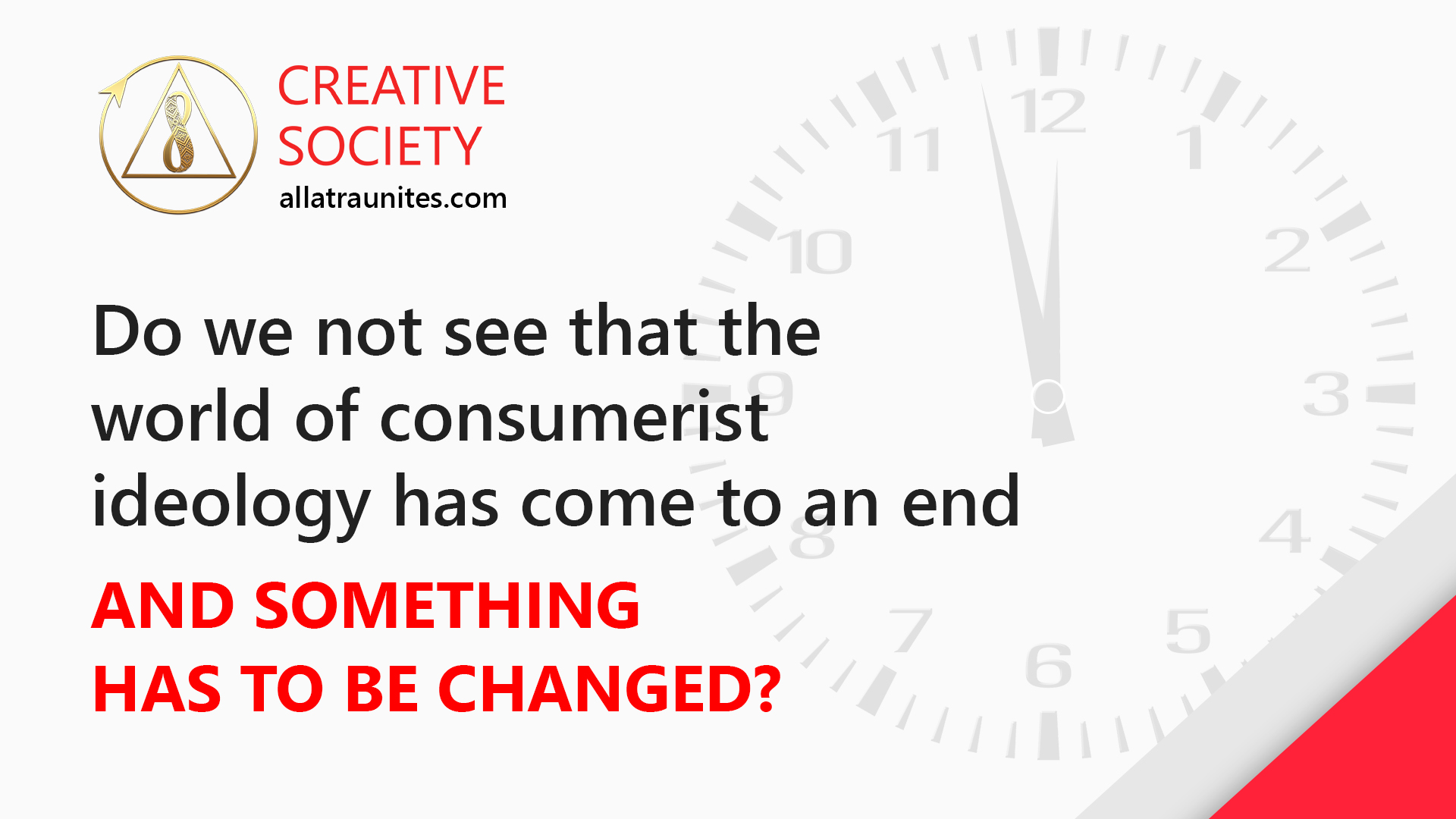 Two paths of development. What will we choose?

The current situation in the world directly points to a need for serious, fundamental transformations in society and to a change in the paradigm and the main vector of civilization’s development. We are faced with two paths of development:

1) either to continue following the path of enmity, division and inaction — the path of the consumerist format of relationships in society, and allow the irreversible consequences that will lead to the death of our civilization to come;

2) or to create a new world of safety and prosperity for everyone by uniting everyone on the common goal of building the Creative Society.

The impending demise of the consumerist world is already absolutely obvious. Society’s choice toward inaction along with the preservation of the consumerist format is a guaranteed way of bringing our entire civilization to the end of its existence in the near future. The harbinger of these irreversible consequences is already in sight, however, humanity still has a chance. 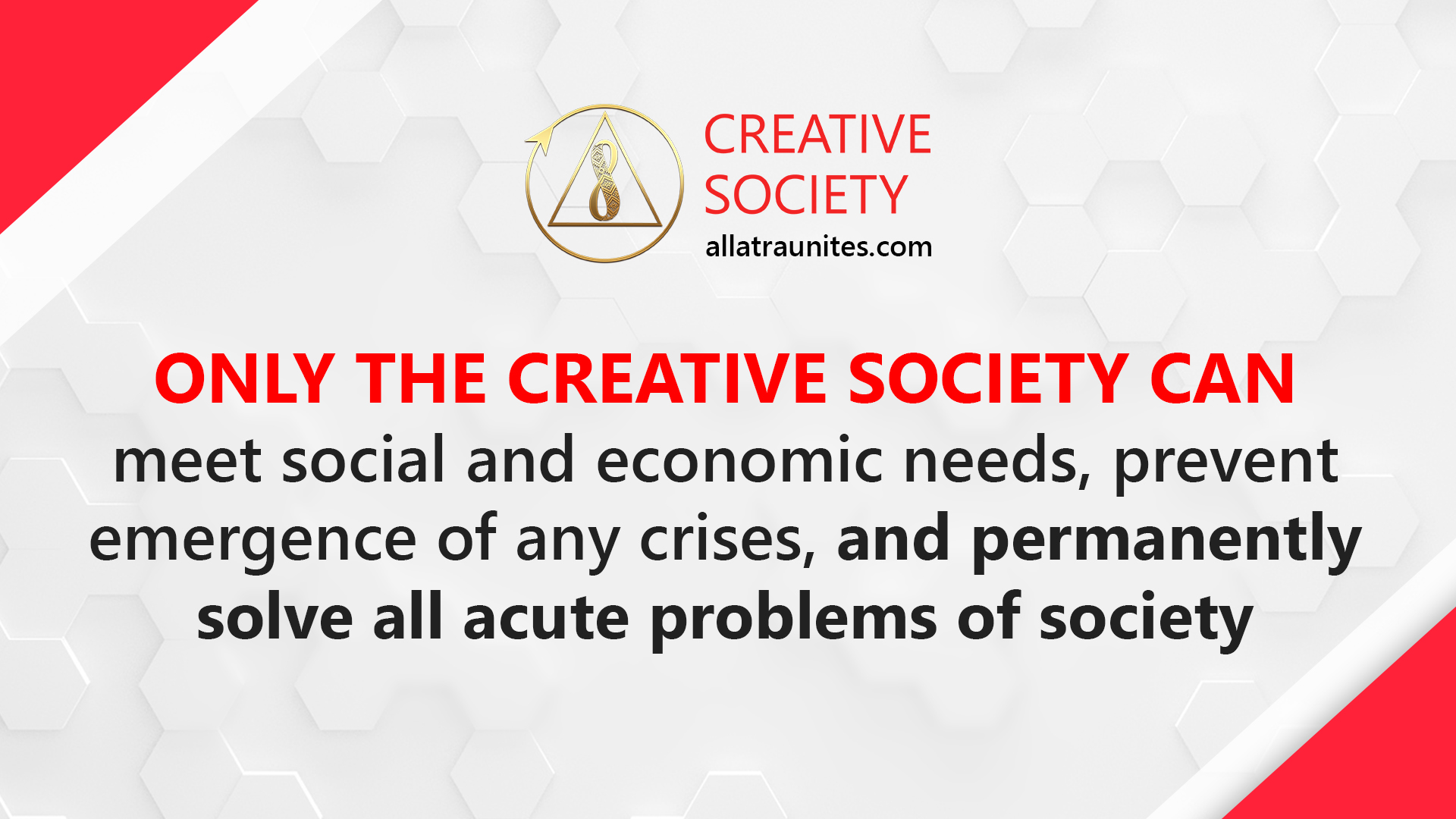 •   free provision of all the basic needs to each person;
•   creation of conditions that will completely eliminate crime, any kind of war, poverty,             hunger, and diseases;
•   peace, safety, freedom, and equal rights in society;
•   tremendous prospects for fulfilling the potential of each individual and of the civilization      globally. 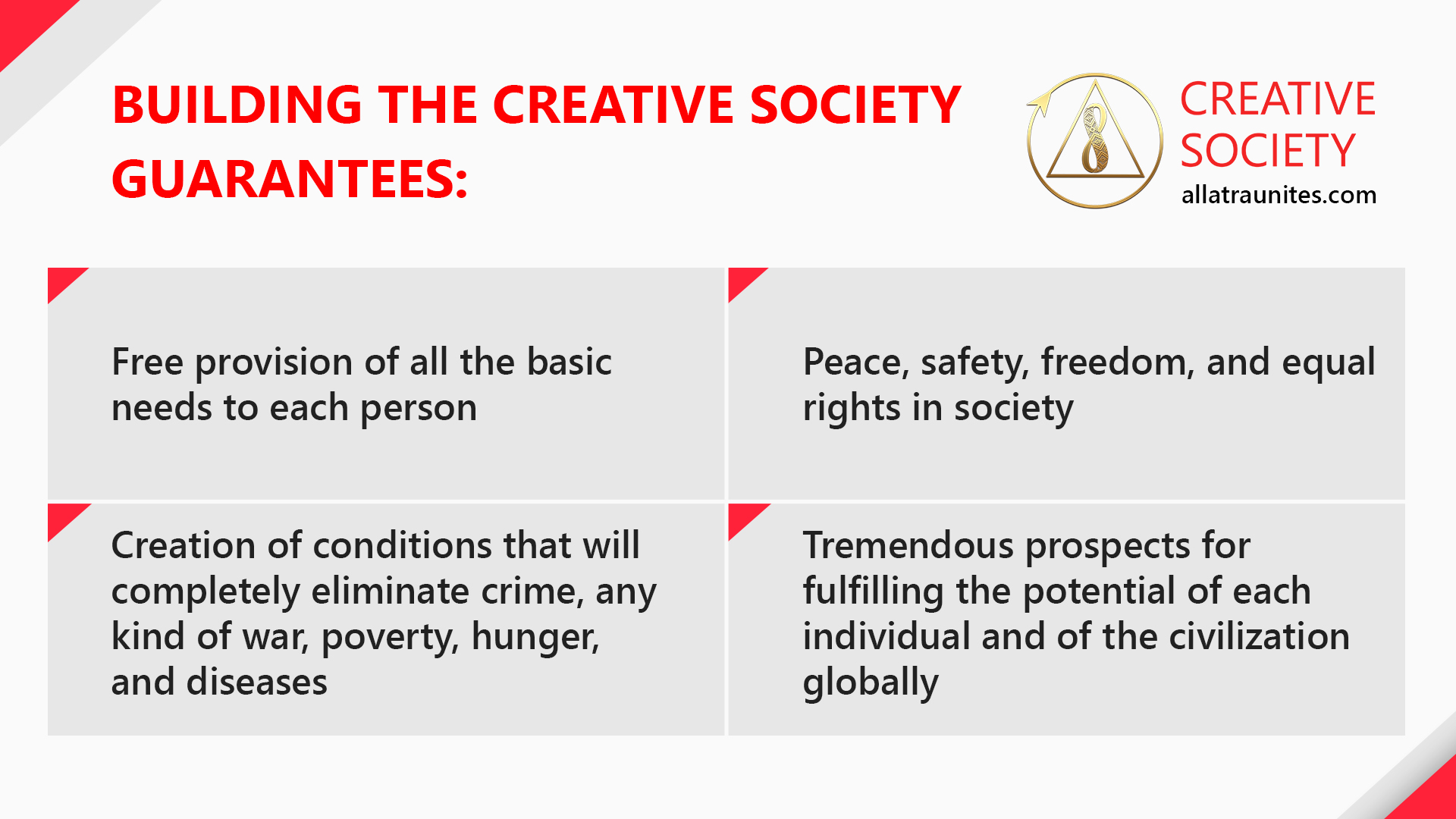 What is the main condition for successful implementation of building the Creative Society?

For a long period of its existence, humanity has been in the midst of confrontations, disputes, and clashes. Yet, in reality, any divisions and conflicts are completely unnatural and alien to us. The consumerist format of relationships has altered our thinking, imposing on us an alien and undoubtedly false way of existing in society with a prevalence of vile inhumane qualities. As a consequence, out of a single cohesive human family we have been transformed into a conglomeration of isolated individuals, often hostile to one another, disparate in our goals, narrow-minded in our thinking toward constant problems, totally dependent on external conditions created by the consumerist format of relations in society. At the same time, everyone is left with an internal unfulfilled desire for a better life, better conditions, and a just and safe world.

How to implement the idea of building a better society for everyone, given the current world situation of total discord and domination of vile qualities? The driving force and prerequisite for building the Creative Society is the consolidation of the prevailing majority of the planet’s population on the common goal of building such a society. The power of human attention plays a key role here. 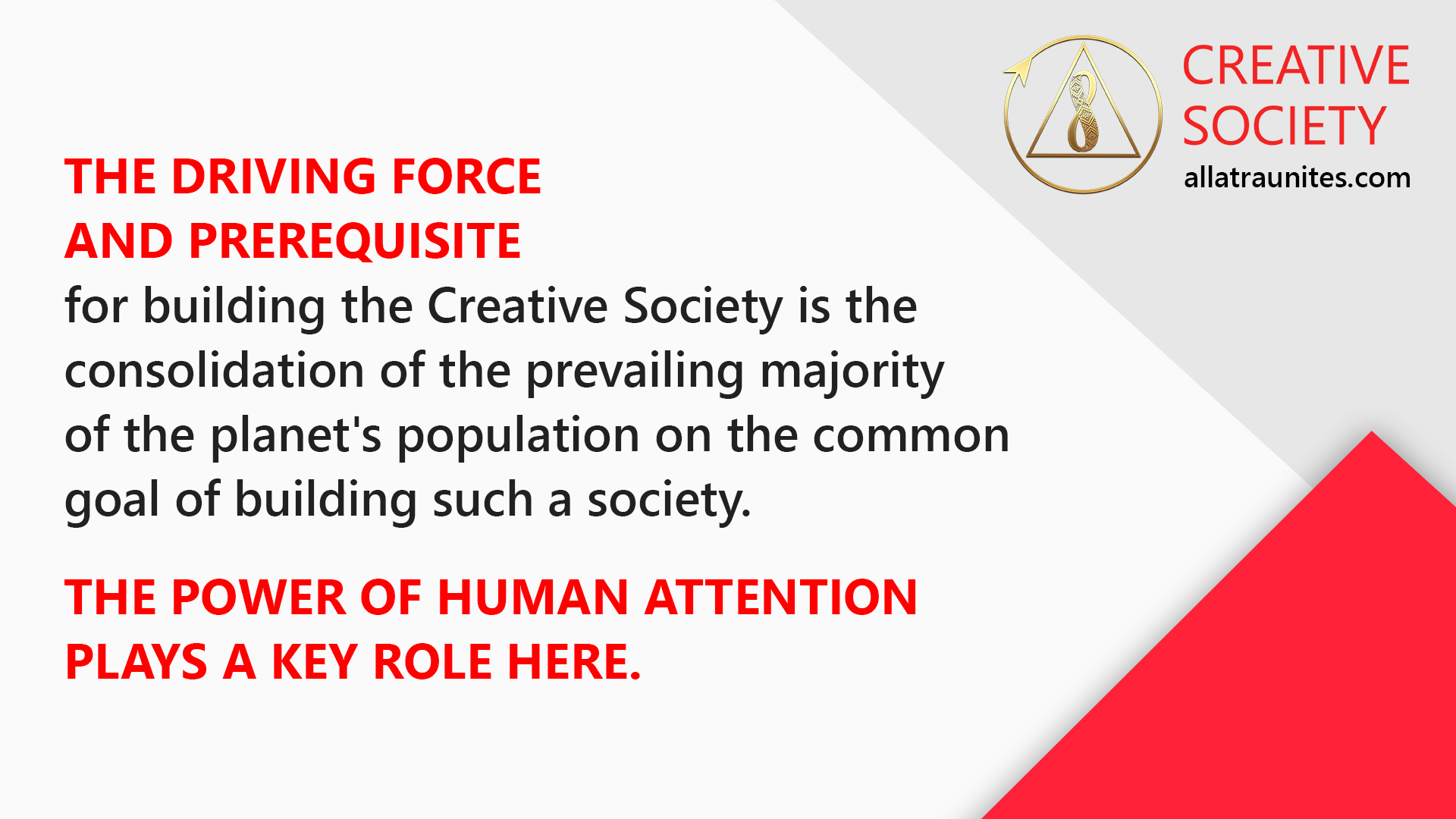 Everybody has noticed in everyday life situations: when a clear goal is set in some work and when its implementation becomes a sincere need and necessity, it gets done much faster. One can note the difference when there is no interest whatsoever in accomplishing certain tasks. With such an approach, even with the presence of outward activity, the work stops and does not move forward; there is either no result or it is unsatisfactory. This means that a human himself is inherently endowed with considerable power, which is implemented through investing his attention. As a consequence, his activities end up being either fruitful or empty, based on the degree of the attention invested in the work he completed as well as his interest and desire.

One can also note the beautiful, sometimes incredible results of people united in groups. It is often impossible for one person to achieve such results alone. That is, the power of collective attention is many times greater than that of a single individual. Imagine how successful people will be if the entire civilization unites? In fact, the need for the unification of all humankind on one goal of building the Creative Society is the most important thing for our society today.

The mechanism of people’s unification. How does it work?

Information about how the unification mechanism works became known to me thanks to watching the video Creative Society Unites Everyone with the participation of Igor Mikhailovich Danilov on the ALLATRA TV YouTube channel. In this video, Igor Mikhailovich gives a detailed explanation of this mechanism.

As it became clear from Igor Mikhailovich’s words, when people who are driven by a common goal unite, when their actions are synchronized, then a common resonance emerges. People’s inner response, their joint unison of interests multiplies the power of the group many times over. The necessary result happens faster when there is a common cohesive joint interaction.

In the video Creative Society Unites Everyone the words of scientist Konstantin Eduardovich Tsiolkovsky were quoted: “The Golden Age will be reached by people who will learn to unite. And unification also has its own law: 2 auras amplify each other by 7, if people are like-minded, if the wave is the same and is directed to the same goal. 3 people will amplify one another by 7 to the second power, that is, by 49 times. If there are 4 people, they amplify one another by a factor of 7 to the 3rd power: 343 times! Thus, the more there are people, the more valuable each next person is, because he multiplies the power many times over. A group is a great power!”

In fact, the attention of all humanity is the most precious resource of civilization. If the majority unites and directs their attention towards the desire to build a new and better world of safety and freedom, we can do it very quickly! We simply cannot but succeed! From this perspective, the importance of the first stage in building the Creative Society, that is, informing people, becomes even more clear. After all, in order for the majority to unite in the right direction, they need to learn of this opportunity. 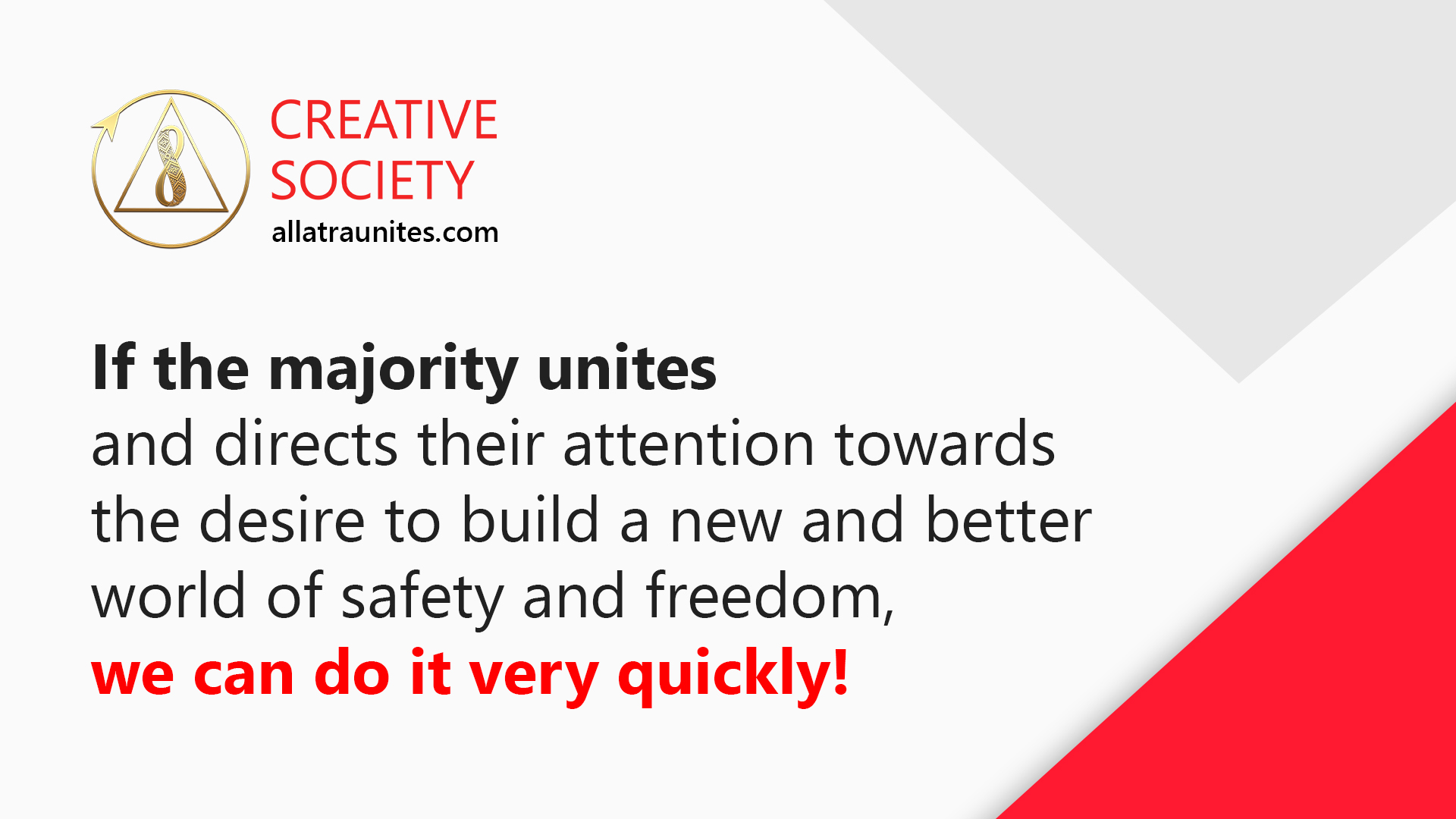 The idea that building a society of freedom and equality is supposedly unattainable has been imposed on us for decades by that very TV, books, and other information sources. But many people around the world have been proving the opposite by their sincere actions, by uniting on the common goal of building the Creative Society. They already act in a direction necessary for civilization, by informing others about the possibility of creating such a beautiful society. The beginning of building the Creative Society is already taking place.

Each person who wishes to take part in building the Creative Society will find practical application of his knowledge and skills, bringing great benefit to humanity and to each person, and thereby contributing to the creation of excellent conditions for his own existence and the existence of his children. Everyone’s life experience, abilities, and skills are necessary and valuable for society. This is the time of global changes. We are the witnesses and contributors to the beginning of the rebirth of our civilization into a new world of happiness, freedom, and equality! 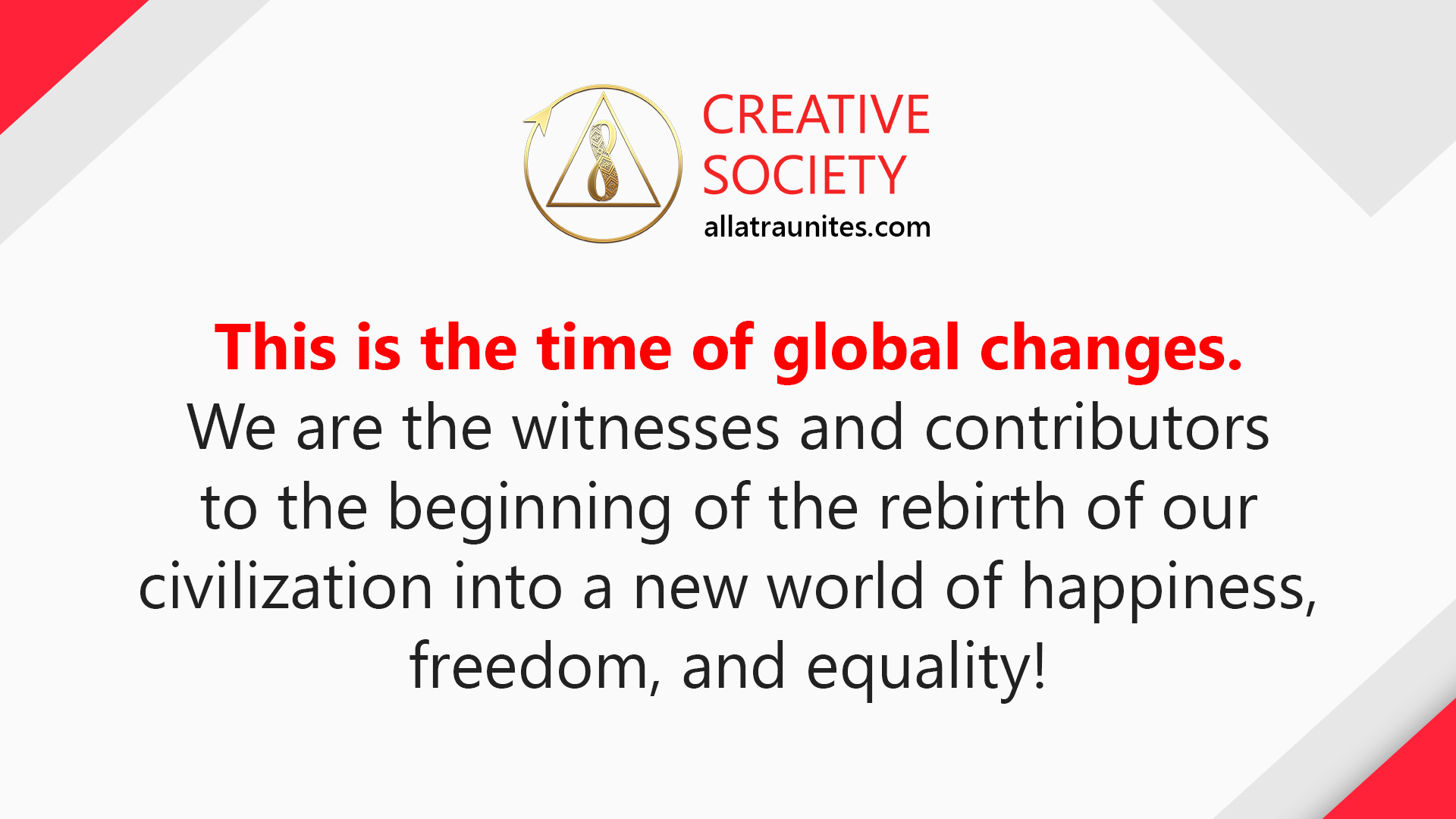 We can do this!

No matter how much they try to divide us, at all times we have strived to unite, and today they will not stop us from doing it either. Having necessary information, knowledge and tools, we can easily do this! If humanity is united in its desire to have a better world for itself and its descendants, nothing can break it and nothing can hinder its choice. After all, everyone wants this! We are already united in our inner aspirations, and it will not be difficult for us to unite in their implementation, in implementation of the desires of all people. Through universal unification on one common goal of building the Creative Society, we can do it! Information has already been given on how to prevent the end and how to contribute to global changes in society. It all depends on each of us! 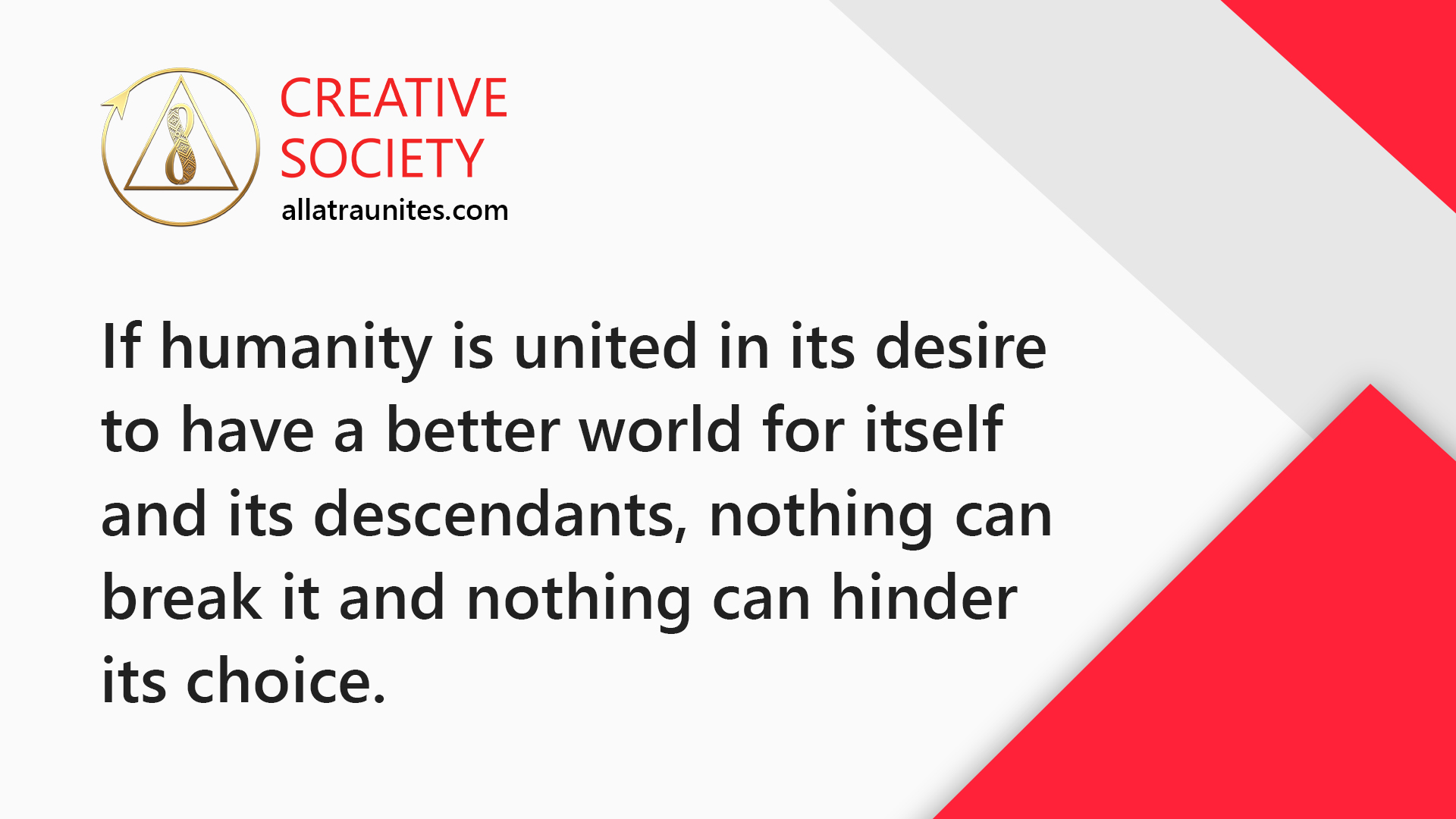 I appeal to you, dear reader! Without you, humanity is weaker! Without your participation, creating a better society for our children is impossible. We can only help our children by uniting. Our power lies in this! Only together can we build a better future. For the sake of our loved ones and children, let’s create a world without war, a world without violence, so that our children’s eyes do not see the inhumaneness that we see, so that they enjoy a society of happiness, stability and true freedom, which we do not have. It is vital that we forget all divisions and move towards each other (if not for ourselves, then at least for the sake of our children). For it takes just one step, a step towards unity! Everyone makes a difference here! 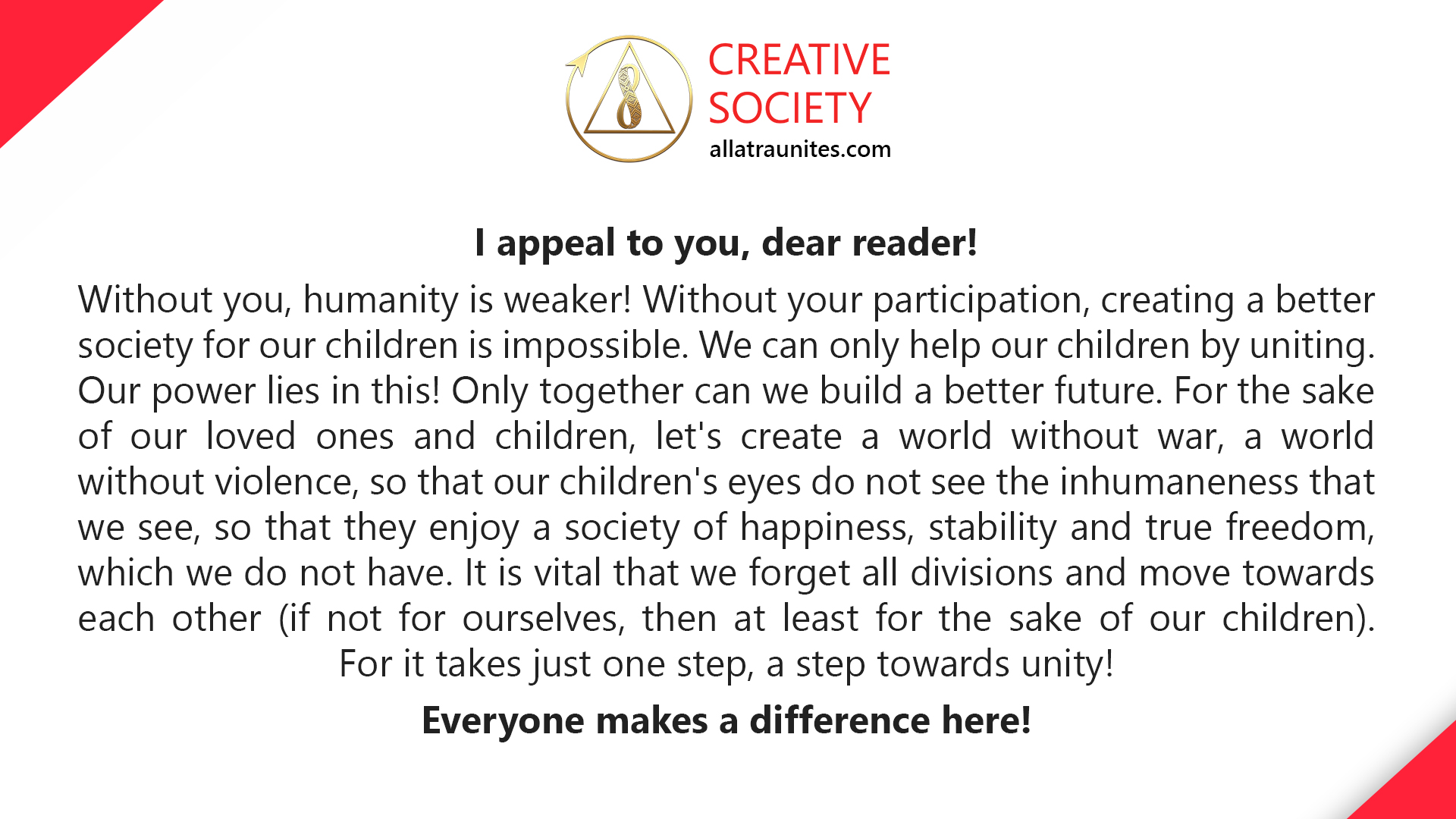 I want to live in Creative Society. Song Premiere 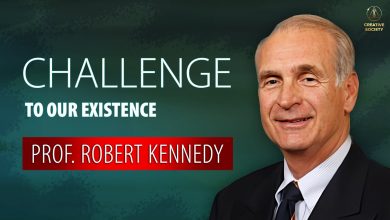 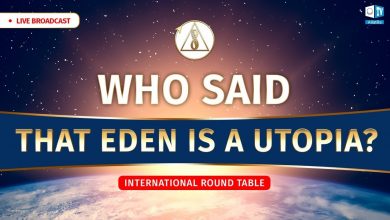 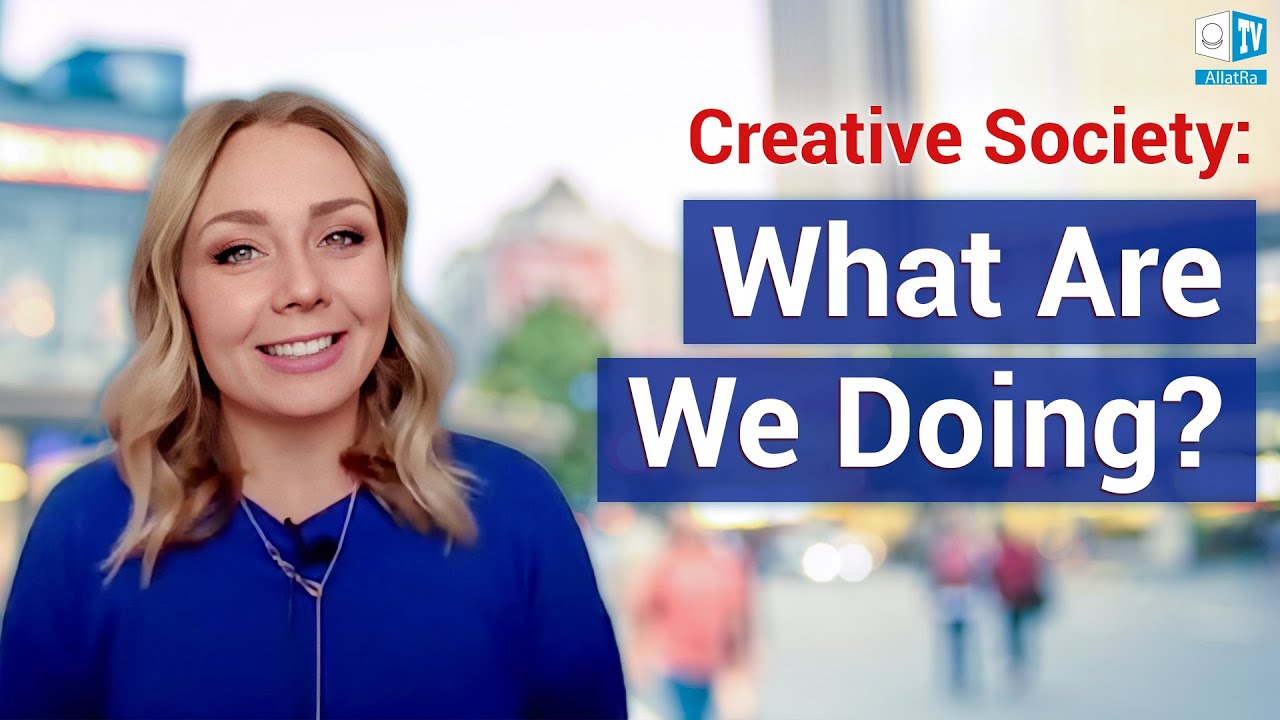 Creative Society. What is it about? 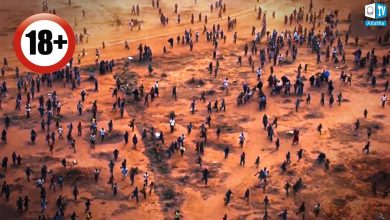 Refugees. The harsh reality will shock you